The Lycian league is the first democratic union in the world. The union was established by the southwestern city-states to resist the occupation of Rhodes after the Magnesia War. Eventually, Lycian league states were declared independent by the Roman Empire until they were occupied by the Romans again in the 1st Century AD. The league consisted of the city-states established in the southwest of Anatolia and were connected to each other by mule tracks used for trade. The city-states developed a very colorful culture thanks to their geography. Most of the cities were located by the water while some were in the mountains. As a result of the harsh landscape, the Lycian people had to build a challenging network of trade which came with breathtaking views. 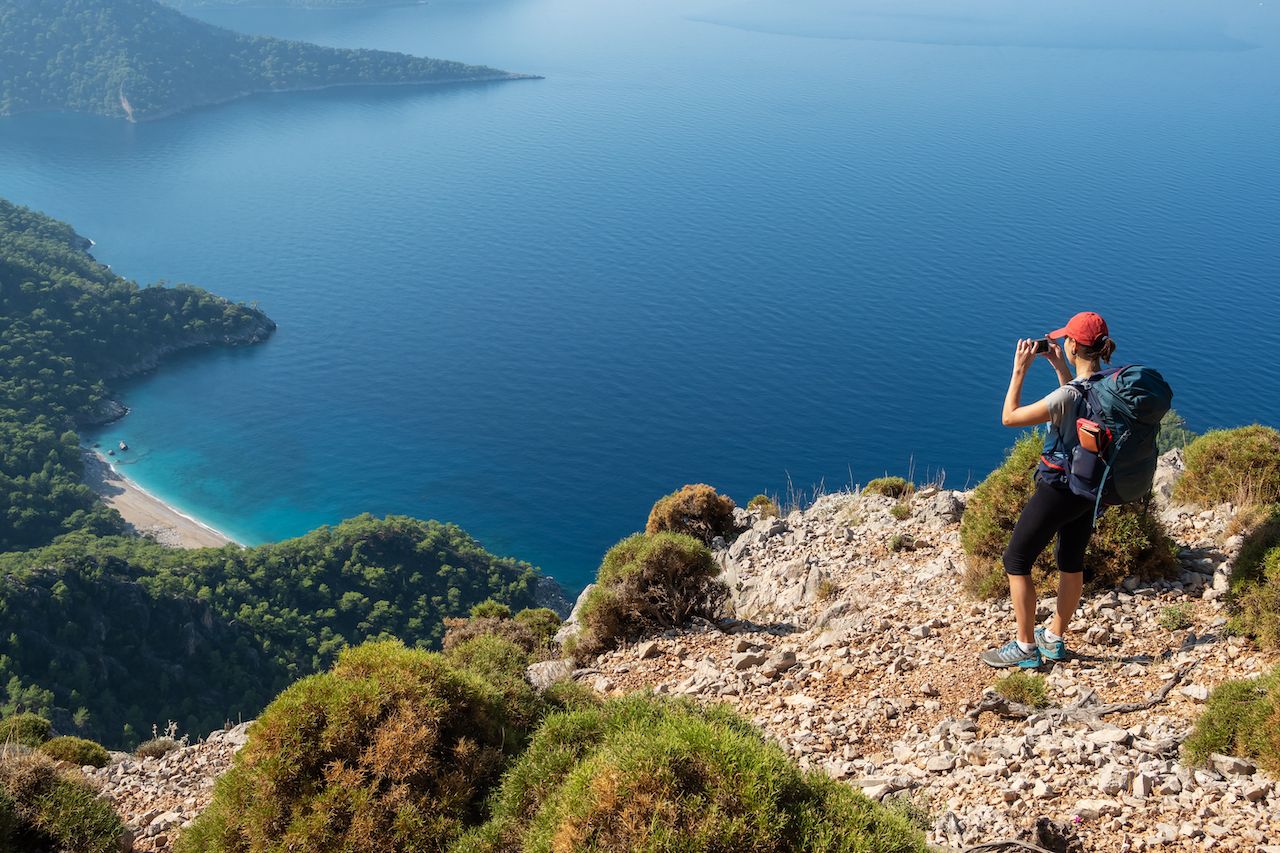 Where is Lycia and the Lycian Way?

Lycia is the ancient name of the southwestern peninsula of the Republic of Turkey. It is called Teke Peninsula in Turkish and the region covers 3 provinces such as Antalya, Burdur, and Mugla. Dalaman and Antalya airports can be used to reach the beginning of the end of the Lycian Way. The Lycian way starts from the Konyaalti district of Antalya and finishes in the Hisaronu district of Fethiye. The trail is 535 kilometers long and passes from various ancient cities, spectacular beaches, thick forests, highlands, and mountain tops. The whole walk can last 30 to 45 days and well-marked according to the French Grande Randonnée system. While volunteers are maintaining the red and white stripes on the trail every year, some companies are funding the signage and publicity. 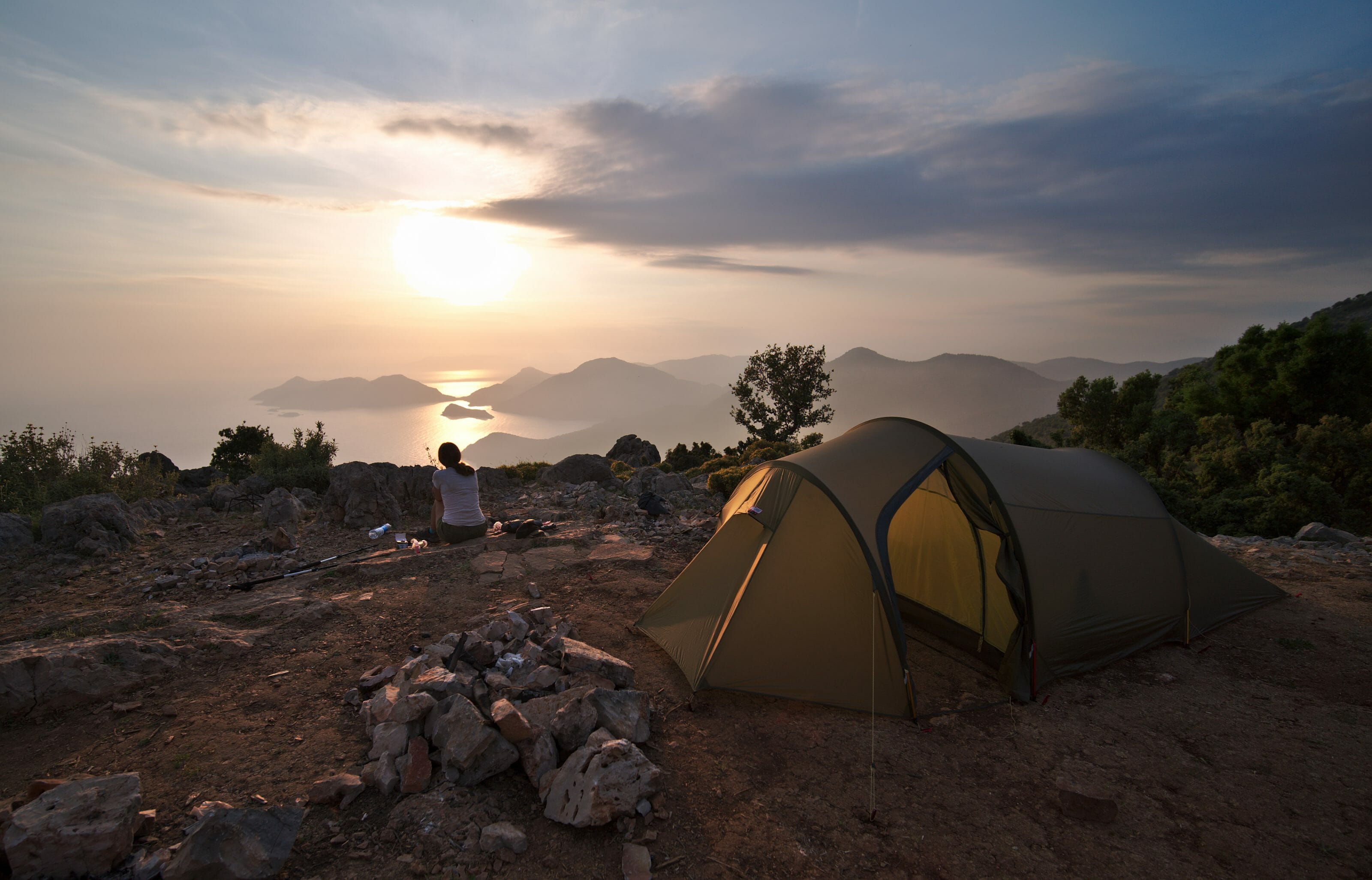 What are the highlights of the Lycian Way?

Breathtaking views of the Mediterranean Sea and Anatolian highlands are the top highlights of the Lycian Way. Besides the majestic ancient cities, there are many Turkoman villages on the trail which are full of generous people. While leaving Fethiye, you will be walking by the Babadag which is a popular paragliding center for tourists. Colorful gliders on top of you are simply fascinating. People visit the last stop of the Lycian Way not for the walk but the Butterfly Valley which is greeting you on the way down to Faralya. That will be among your top views of the trail. The path passing by Kale-Ucagiz is beautiful thanks to the Castle of Simena, a sunken city on the Kekova Island, and the world-famous Lycian tombs on the water and by the castle. My favorite on the Lycian Way is Chimera which is nearby Olympos. The rock gas burning naturally in the middle of the forest has spectacular views at sunset. 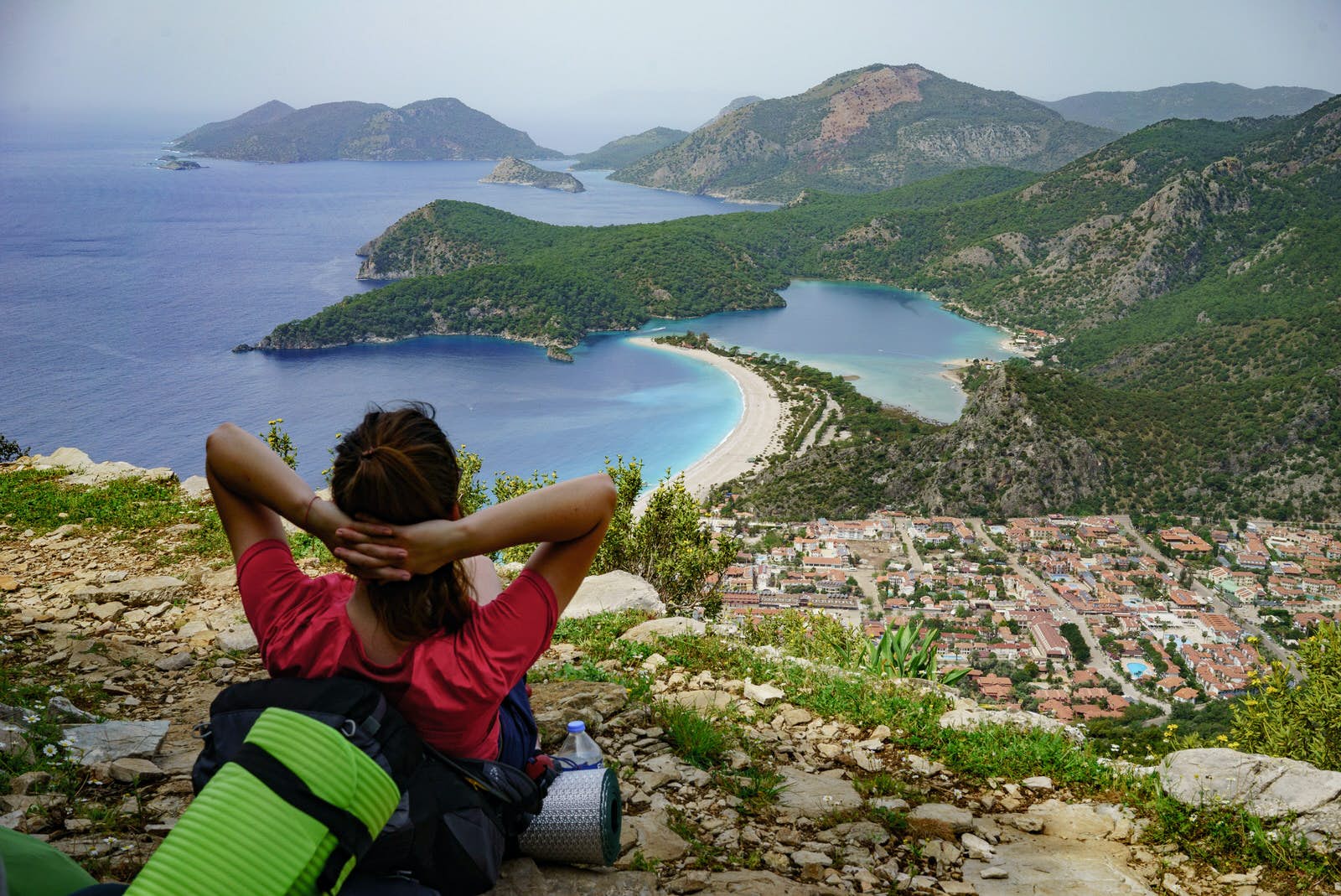 When you should walk the Lycian Way?

The Mediterranean climate is very mild. Lycian way's coastal portion is doable throughout the year. I would only recommend avoiding the summer months because of the heat. Even if the whole trail will finish in 30 days by a fit explorer, it is always good to extend it as you will be covering 535 kilometers in the end on a challenging trail. There is plenty of information about the trial but the best is getting the Lycian Way book written by Kate Clow who is the architect of the Lycian Way. She is the first person to study the trails, mark them and create one of the best long-distance walking trails in the world. 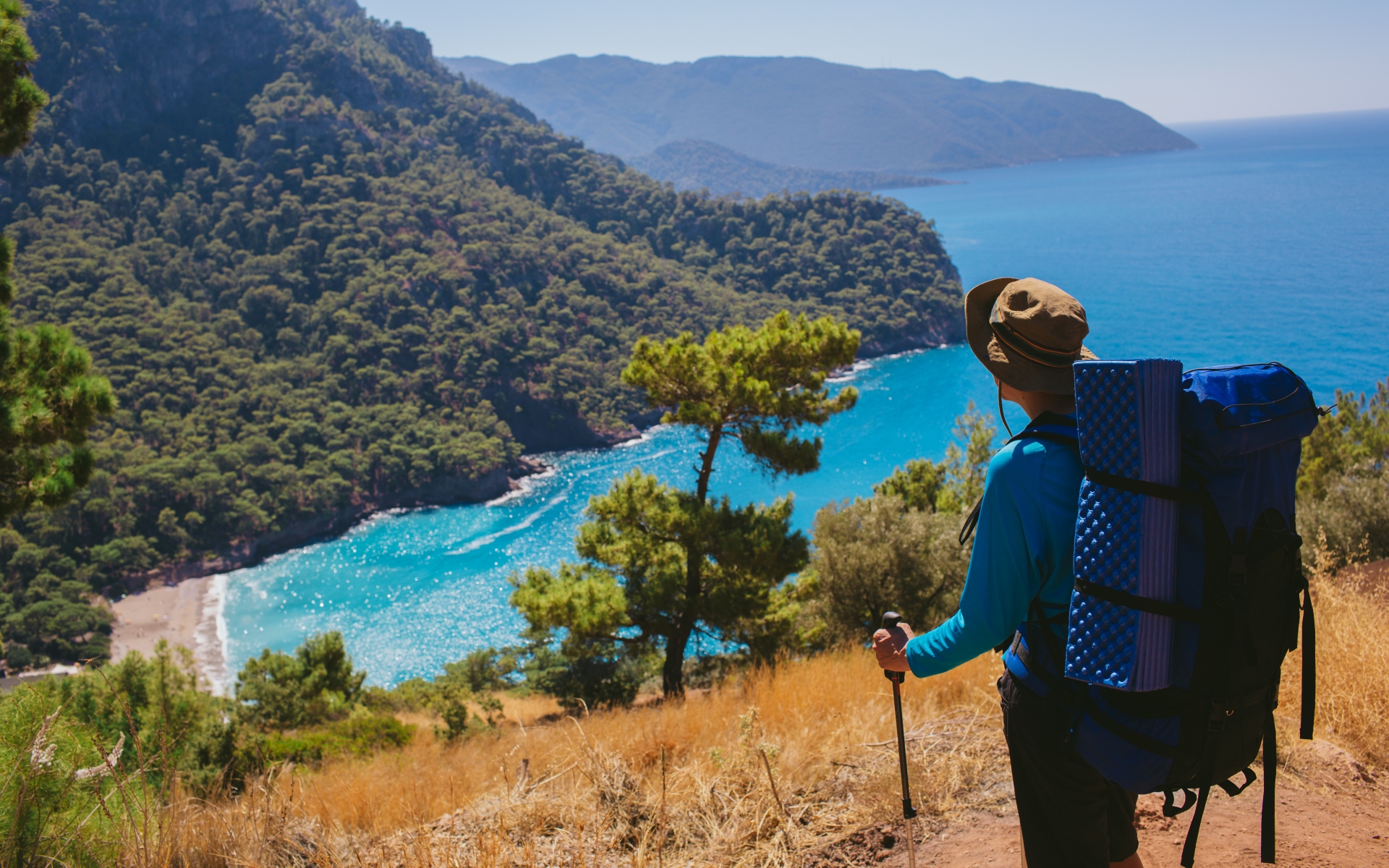 What are the stages of the Lycian Way? 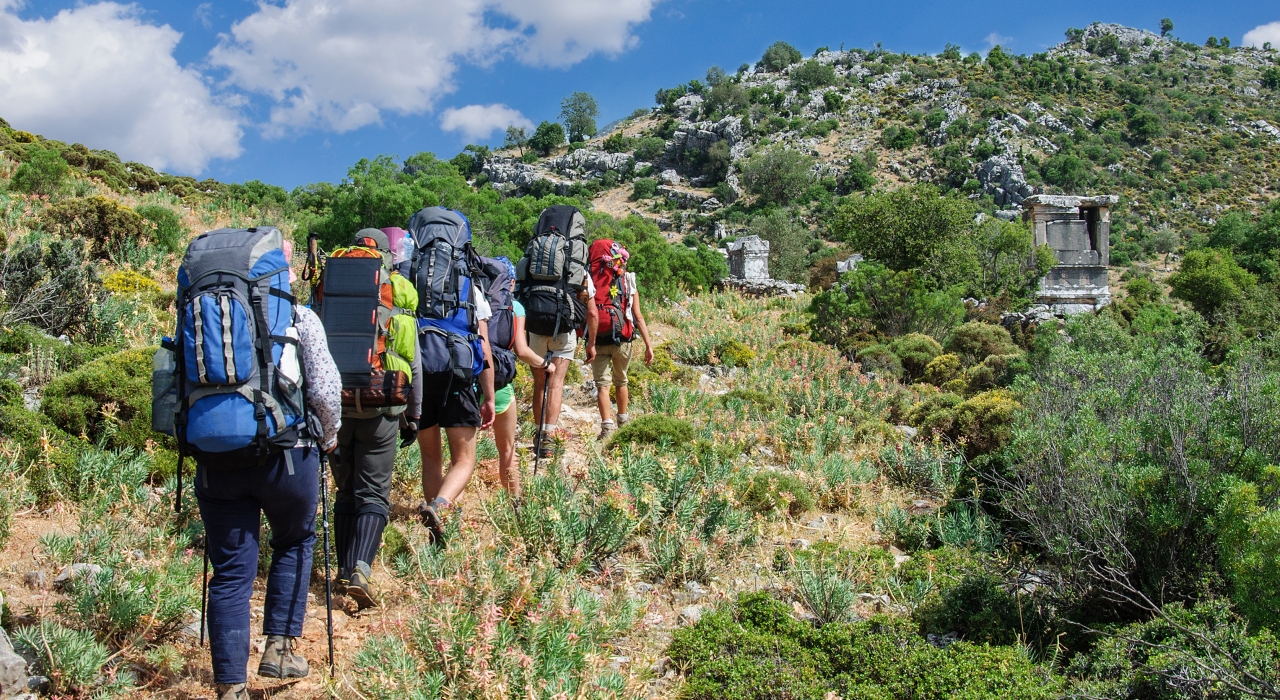 How to be prepared for the Lycian Way?

The majority of the Lycian Way is mull trails. You will walk over dolomites mainly so durable hiking boots are recommended for the walk. I recommend carrying two pairs of shoes to avoid the athlete's foot. While interactive maps are available, Kate Clow's book for the trail is highly recommended as it has profound information about the trail, accommodations, and lodging options. Compass, swim suite, towels, backpack, swiss knife, matches, headlights, cameras, and a small first aid kit will be useful during the hike. As the best time frame for the walks is in spring and autumn, you should have raincoats and quick-drying gear in your backpack. There are no admission fees for the walk. You can bring your camping gear and camp along the Lycian Way totally for free.

Would you like us to tailor you a private itinerary, including a hiking program in Lycian Way? Benefit from our expertise. We offer tailor-made tours to Turkey for all interests and desires, from romantic honeymoons and scenic self-drive road trips to photo tours with experienced photographers and cultural tours in major destinations. We arrange everything for your Turkey Tours, including hotel bookings, airport transfers, guided tours, and top-notch experiences. We want you to have a great time in Turkey and make sure your trip is a memorable one as we have escorted so many tours in Turkey personally. Imagine dealing with only one person for all your travel details, receiving customized itineraries and recommendations which will suit exactly your travel interests. Contact Turkey Tour Organizer to get a personalized day-by-day itinerary for your trip to Turkey.