Sanliurfa, known as the land of the prophets and considered the seventh-largest city in Turkey, is located in the Southeastern Anatolia Region. People of Turkish, Kurdish, Zaza, Arab, Circassian, Afghan and Armenian origin live together in a fraternity in Urfa, which received the title of "Sanli" in 1984 due to its success in the War of Independence. When you go to Sanliurfa, you can pamper yourself with its rich cuisine and famous Turkish Nights, pay a visit to Balikligol where you will commemorate the prophets, Harran which smells of history, Halfeti which is a member of Cittaslow network, Gobeklitepe which is on the Unesco World Heritage list.

Sanli (Turkish); having, worthy of, or bringing fame or admiration - Glorious

According to the finds obtained from the archaeological excavations, the city was inhabited during the Neolithic Age. Urfa, which has witnessed various civilizations throughout history, was named Urhai and Al-Ruha by the Arabs and Edessa by the Seleucids.

Sanliurfa is known as the "Land of Faiths." You ask why? The oldest temple ruins in the world are located here. The temples of the Pagan religion, where the moon, sun, and planets were considered sacred during the Assyrian and Babylonian periods, are located here (in Harran and Sogmatar). The Prophet Abraham, known as the ancestor of three monotheistic religions, was born here, the Prophet Ayyub and many prophets lived here, and the Prophet Jesus was blessed here.

Places to see in Sanliurfa 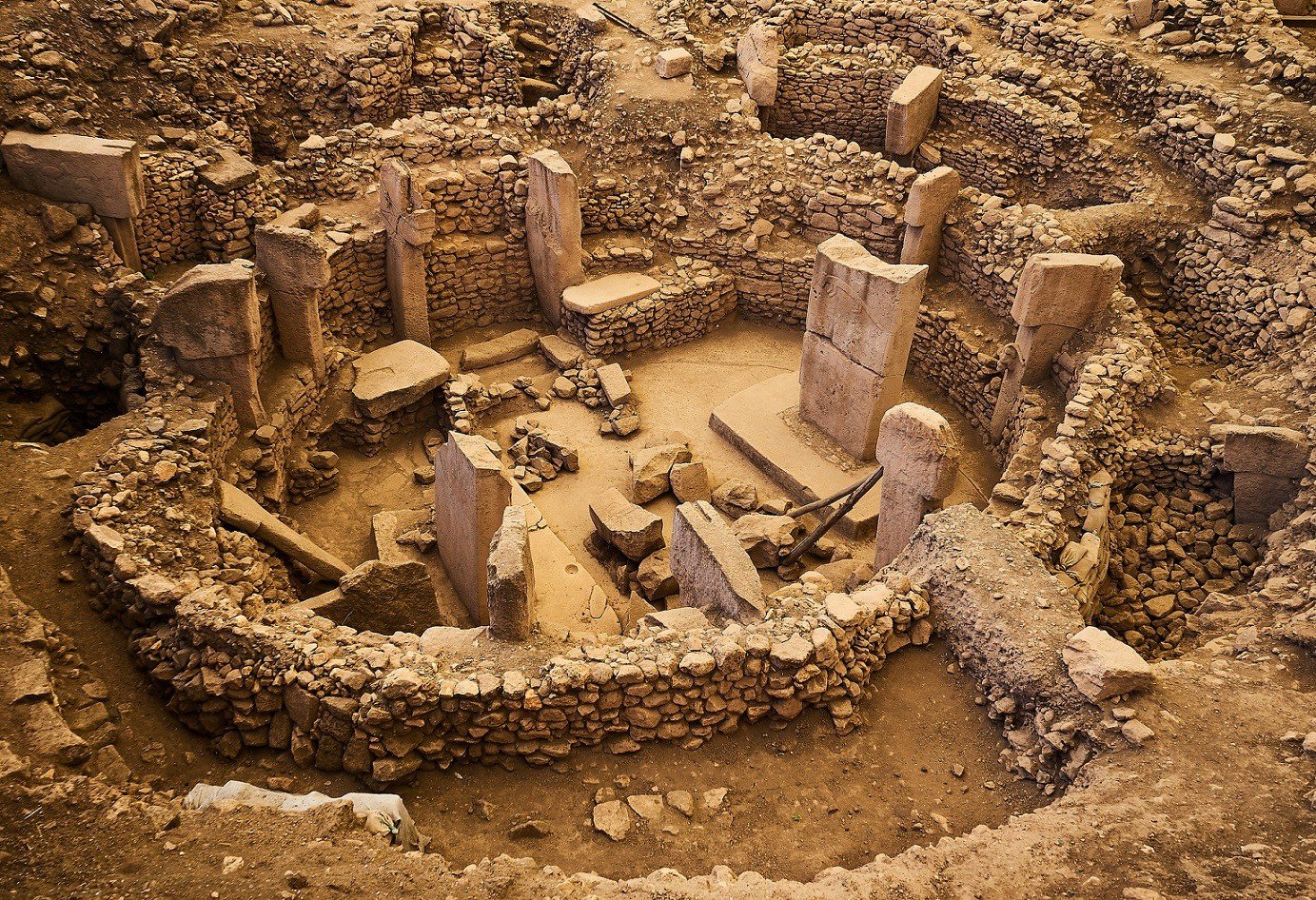 For many years, it was thought that the first temple of humanity, belonging to the polytheistic period before monotheistic religions, was the Ġgantija Temples in the Republic of Malta, dating back to 5000 BC. However, with the determination of Gobeklitepe, this has lost its validity. Gobeklitepe has become a place that has changed the way we know about human history and has rewritten history all over again. For this reason, it is described as the zero point of history.

Gobeklitepe is the oldest known group of cult structures in the world, located in the vicinity of Orencik Village, approximately 22 km northeast of Sanliurfa city center. It is dated between 10500-8600 BC, suggesting a sacred center with its unusual finds. Thanks to the traces Gobeklitepe left on us. We can see that when human beings were about to transition from a hunter-gatherer lifestyle to a settled life, to a farmer-producer order, they were not content with a modest and simple lifestyle as we thought. Still, on the contrary, they lived a magnificent phase. Most likely, we learn that they did not move to a settled life because of the need for agriculture and that the need for agriculture arose when they settled down. In this context, Gobeklitepe has been on the UNESCO World Heritage list since 2018. 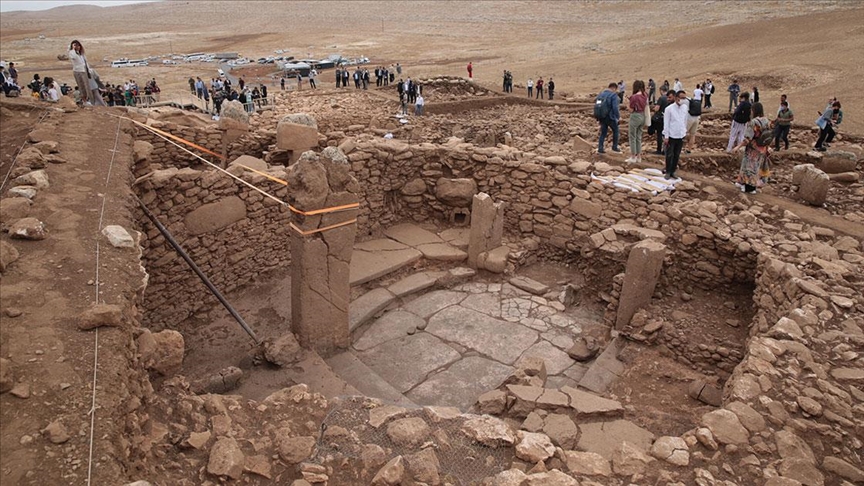 Similar obelisks were found in Gobeklitepe in Karahantepe, which is located near the Kargalı District in the Tek Tek Mountains National Park. While there are mainly animal figures in Gobeklitepe, it is seen that there are human figures in Karahantepe. Karahantepe, due to over 250 "T" shaped obelisks, Neolithic human and animal statues, pit-based structures carved into the bedrock; After Gobeklitepe, it became one of the discoveries that made a sensation in the world. In the area, which is also known as Keçilitepe by the local people, an older settlement will probably be reached than Gobeklitepe. 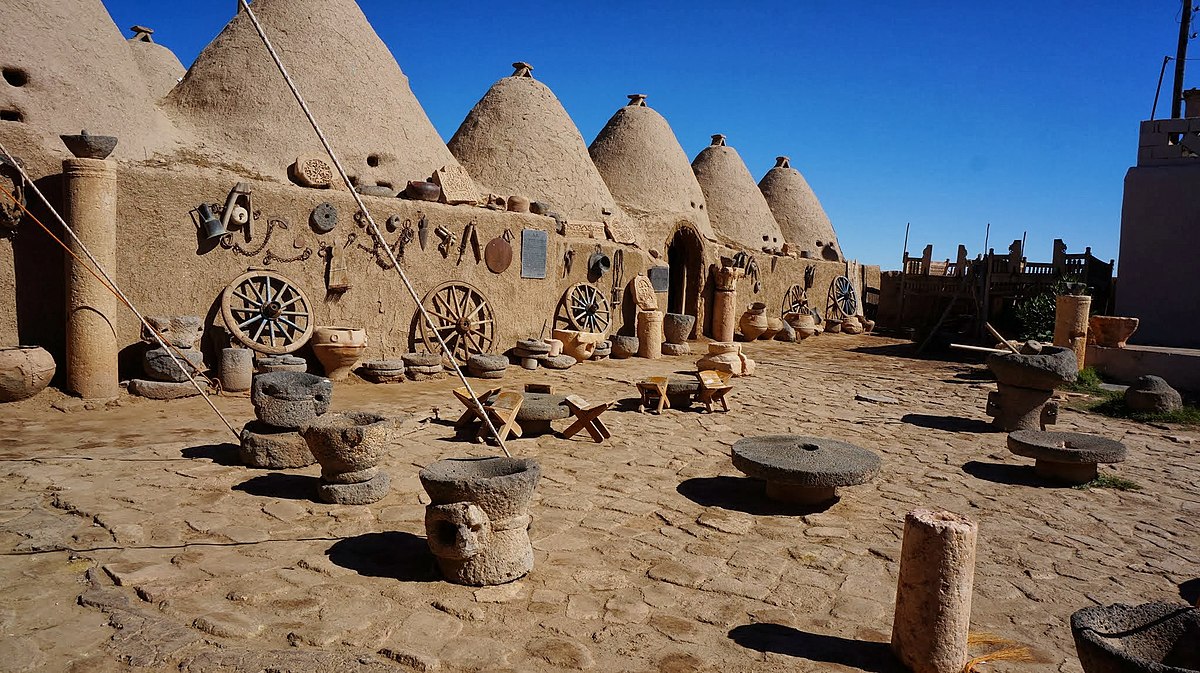 Harran (Carrhae), which was founded around 3000 BC in the center of a plain named after it, is a favorite place for tourists. In the settlement, which was one of the most important centers of Mesopotamian paganism, there were the temples of the Moon God Sin and the Sun God Shamash. The flow of trade over Harran for thousands of years has led to the formation of a rich cultural accumulation. Harran and Sanliurfa are on the UNESCO World Heritage Tentative List. 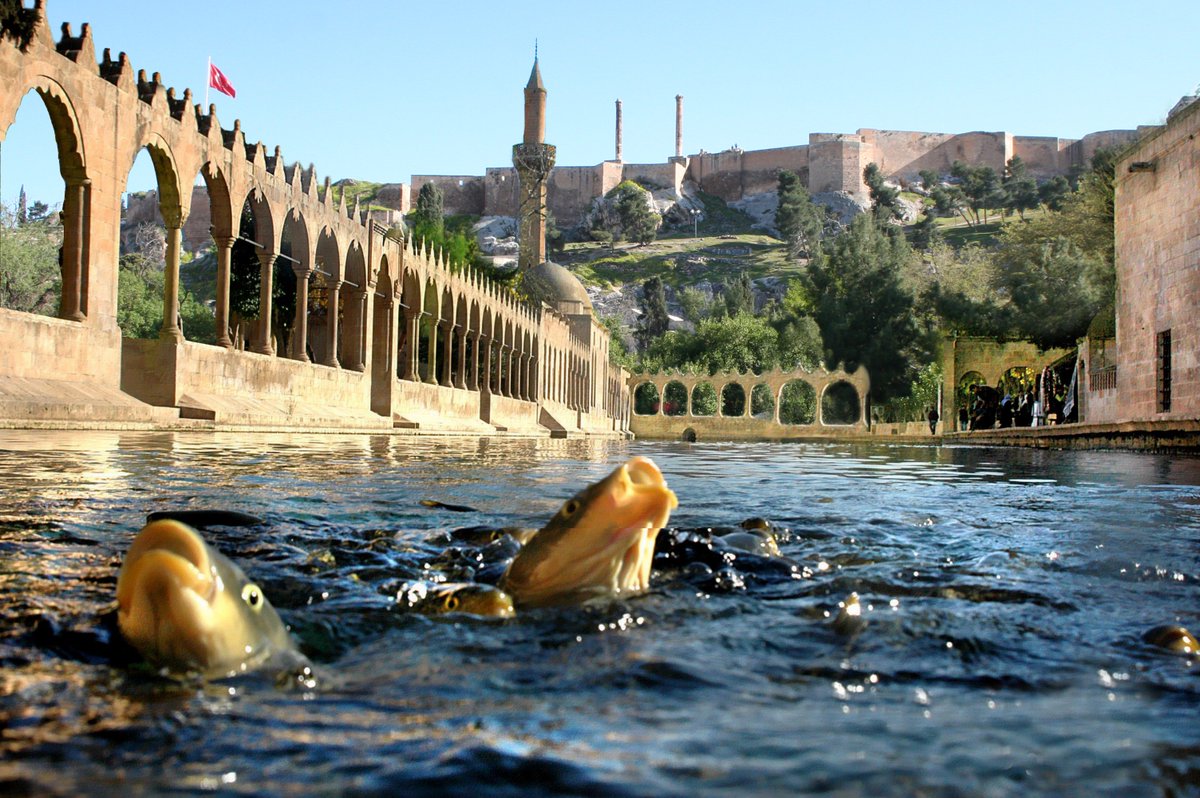 Aynzeliha and Halil-Ur Rahman Lakes, located in the southwest of the city center and known as the place where the Prophet Abraham fell when he was thrown into the fire, are one of the most visited places in the city with their sacred fish and historical artifacts around them. 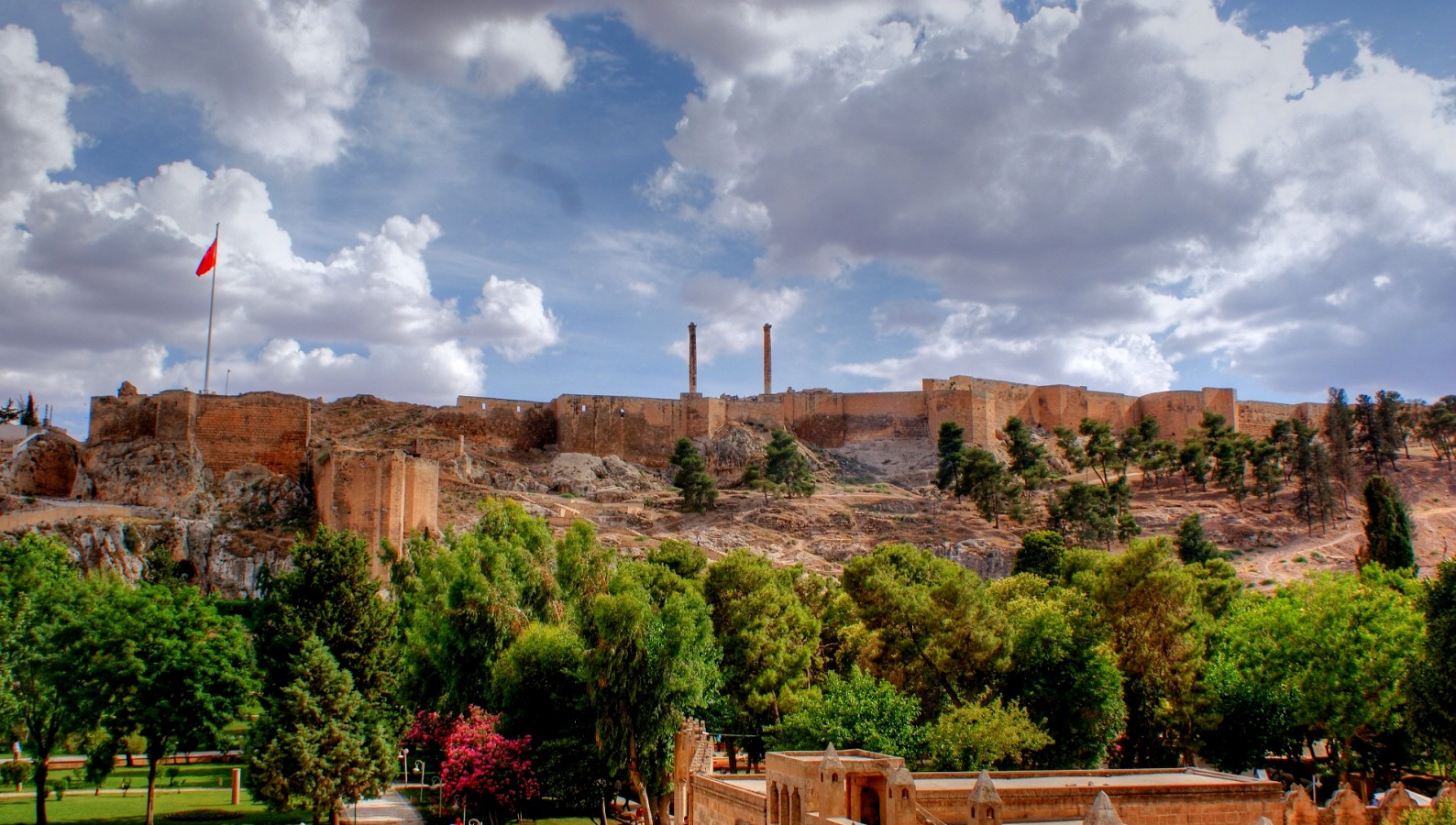 Although there is no definite information about its construction, according to the accepted opinion, it is thought that the Urfa Castle was built between 812 and 814 AD during the Abbasid period. The two columns with Corinthian caps on the castle were built as monumental columns during the reign of the 9th Manu of Edessa, between the years 240-242 AD.

Sanliurfa Museum is definitely an extraordinary museum. You can see a model of Gobeklitepe in the museum. In addition, stone artifacts from the Assyrian, Babylonian and Hittite periods, tools from ancient times and ethnographic remains are also on display.

Mosaics unearthed in Haleplibahçe are exhibited at the Haleplibahçe Mosaic Museum. The Orpheus Mosaic, which was smuggled abroad from Sanliurfa, was exhibited in the Dallas Art Museum, and in the Istanbul Archeology Museum after it was brought back to the country, and then it was brought to Sanliurfa. On the panel, Orpheus, the Phrygian poet, sits facing right and plays the lyre. On his left, carnivorous animals such as lion, bear, leopard and pig, on his right, herbivorous mountain goat and horse, and in the upper left corner, the birds are listening to the lyre he plays. Halfeti is known as the Lost City or Hidden Paradise. The view of the mosque, whose body is under the Euphrates River and only a part of its minaret is above the water, is so magnificent that it cannot be erased from the memories.

Would you like us to tailor you a private itinerary including Sanliurfa? Benefit from our expertise. We offer tailor-made tours to Turkey for all interests and desires, from romantic honeymoons and scenic self-drive road trips to photo tours with experienced photographers and cultural tours in major destinations. We arrange everything for your Turkey Tours, including hotel bookings, airport transfers, guided tours, and top-notch experiences. We want you to have a great time in Turkey and make sure your trip is a memorable one as we have escorted so many tours in Turkey personally. Imagine dealing with only one person for all your travel details, receiving customized itineraries and recommendations which will suit exactly your travel interests. Contact Turkey Tour Organizer to get a personalized day-by-day itinerary for your trip to Turkey.