Yerebatan Cistern, built by Emperor Justinian in 532, is also known as the Basilica Cistern because it is located under the Stoa Basilica. The cistern is a giant structure covering a rectangular area of ​​140 m in length and 70 m in width. There are 336 columns, each 9 m high, inside this cistern, accessed by a 52-step stone staircase. These columns rising in the water remind them of an endless forest and impress the visitor as soon as they enter the cistern.

Most of the columns, which are understood to have been collected from older structures and were carved from various types of marble and granite, are mostly composed of one piece, and some of them consist of two pieces on top of each other. The headings of these columns have different characteristics in places. 98 of these reflect the Corinth style, while some of them reflect the Doric style. The cistern walls were built of brick, 4.80 m thick, and the brick-paved floor was plastered with a thick layer of Khorasan mortar, making it waterproof. This cistern, which has a total area of ​​9,800 m2, has a water storage capacity of approximately 100,000 tons.

The water of the cistern, where 7,000 slaves worked in its construction, was brought from the Eğrikapı water division center in the Belgrad forests 19 km from the city with the help of the 971 m long Valens (Bozdoğan) arch built by the emperor Valens in (368) and the 115.45 m long Maglova Arch built by the emperor Justinian. Most of the cistern columns are cylindrical, except for a few that are angular or grooved. Among these columns, the one which is decorated with the repetition of the Peacock Eye, Pendant Branch, and Tear in engraving and relief is especially noteworthy. 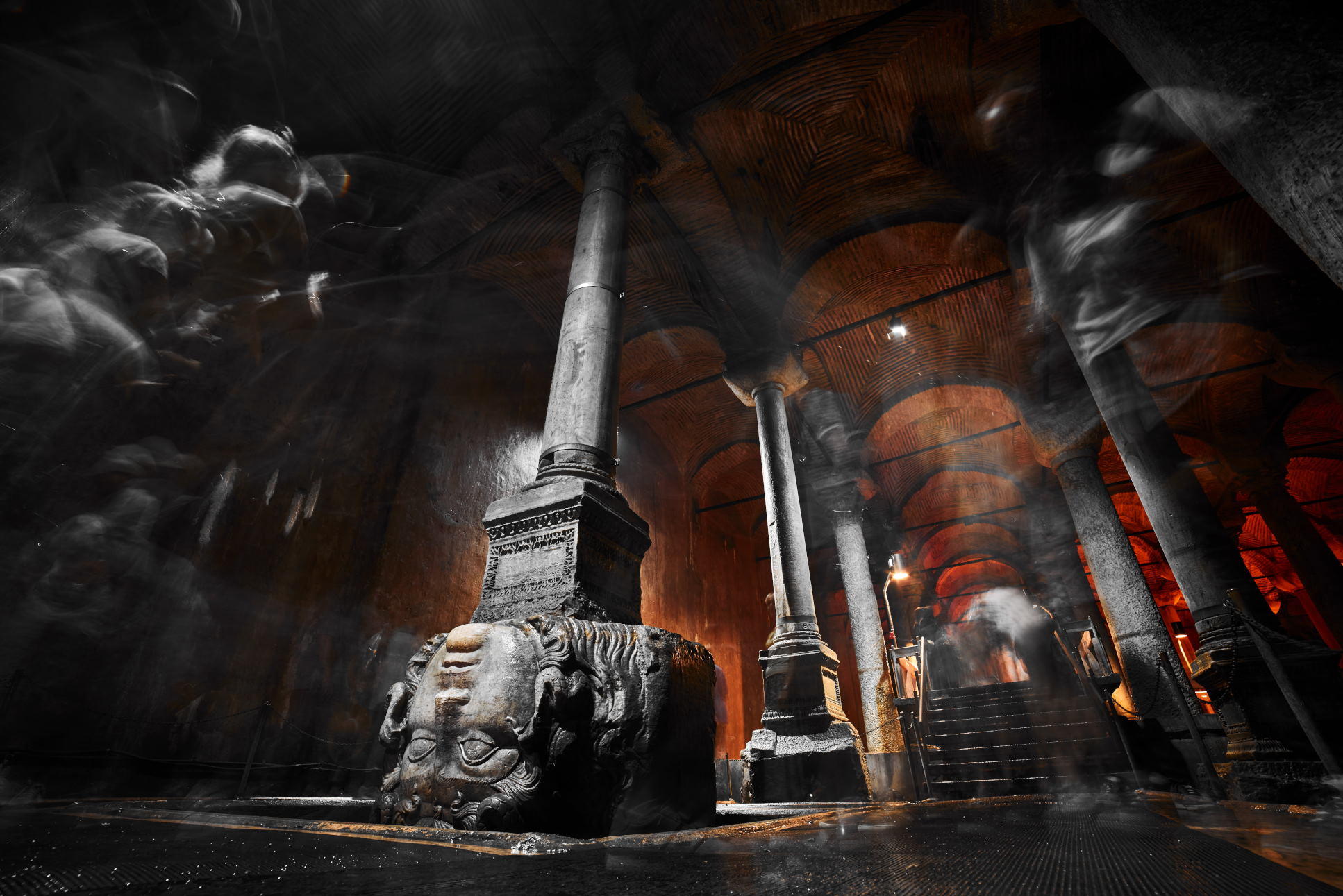 According to a rumor, the shapes on it look like tears tell about the hundreds of slaves who died in the Great Basilica construction. After passing the middle of the cistern, the part seen as an irregular projection from the southwest wall inwards, about 40 m long and 30 m wide, is the walls built during the repairs made in the past centuries to bear the weight. 40 columns, 9 columns at the longest part, and 2 columns at the narrowest part, are not visible because they are behind these walls. The two Medusa heads, which are used as pedestals under the two columns in the northwest corner of the cistern, are the masterpieces of Roman Age sculpture. Although there is no definite information about the building from which these heads belonging to the IV century were taken and brought here, it is thought that it was removed from an ancient structure belonging to the Young Roman Age and brought here.

Many rumors based on Medusa mythology make this structure even more mysterious. According to a rumor, Medusa is one of the three Gorgons, the underworld's female monster in Greek Mythology. Of these three sisters, only the Serpent-Headed Medusa is mortal. And she has the power to turn those who look at him into stone. It is believed that the paintings and sculptures of Gorgon heads were placed to protect large structures and special places from evil in the first period, and Medusa was placed here with this idea.

According to another rumor, Medusa is a girl who is proud of her black eyes, long hair, and beautiful body. He loves Perseus, the son of the Greek God Zeus. The goddess Athene loves Perseus and is jealous of Medusa. Athene puts Medusa's hair in the shape of dreadful snakes. Now whoever Medusa looks at, he/she turns into a stone. Thinking that Medusa was fascinated, Perseus decapitated her and took her head in the wars. Those who see the head turns into a stone, and Perseus wins the battles.

After this event, it is said that Medusa was engraved on sword handles and columns on the reverse and side. According to another rumor, Medusa saw herself in the sword of Perseus and turned into stone. For this reason, the sculptor here made Medusa in three different positions as normal, reverse, and lateral according to the reflection positions of the light. Medusa's head, worked in normal position, was brought from Didim. 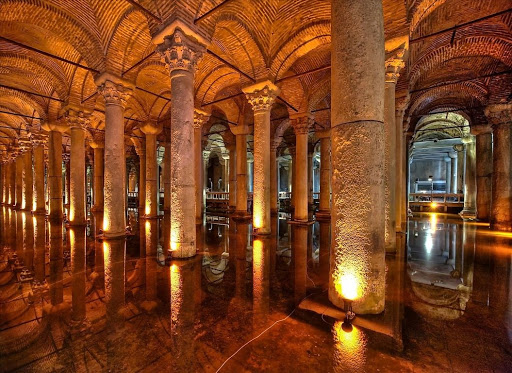 The Basilica Cistern was used for a while after the conquest of Istanbul by the Ottomans in 1453, and water was given to the gardens of the Topkapı Palace, where the sultans lived. It was understood that the Ottomans, who preferred tap water, that is, flowing water, instead of stagnant water, did not use it after establishing their own water facilities in the city, and the cistern was rediscovered by Dutch traveler P. Gyllius, who came to Istanbul in 1544-1550 to research the Byzantine ruins. The Basilica Cistern has undergone various repairs since its establishment. The first repair of the cistern, which was restored twice during the Ottoman Empire period, was built by Architect Mehmet Ağa from Kayseri in the 18th century during the reign of Ahmet III. The second major repair in the 19th century was during the reign of Sultan Abdülhamit II (1876-1909). The Istanbul Municipality initiated the biggest repair in the Republican period in 1985. With the removal of 50.000 tons of mud and the excursion platform's construction, it was completed on September 9, 1987, and opened to visitors again.

Would you like us to tailor you a private itinerary, including Basilica Cistern? Benefit from our expertise. We offer tailor-made tours to Turkey for all interests and desires, from romantic honeymoons and scenic self-drive road trips to photo tours with experienced photographers and cultural tours in major destinations. We arrange everything for your Turkey Tours, including hotel bookings, airport transfers, guided tours, and top-notch experiences. We want you to have a great time in Turkey and make sure your trip is a memorable one as we have escorted so many tours in Turkey personally. Imagine dealing with only one person for all your travel details, receiving customized itineraries and recommendations which will suit exactly your travel interests. Contact Turkey Tour Organizer to get a personalized day by day itinerary for your trip to Turkey