Magnesia Ancient City is located in Tekin Village of Germencik district of Aydın. Magnesia or Magnesia Ad Maeandrum is an ancient city where mathematics, geometry, physics, architecture, and human skills are at their peak. The 30,000-seat stadium in Magnesia is considered one of the best-preserved ancient stadiums in the world. The Artemis Leukopheyene Temple is considered one of the most aesthetic temples built in honor of the goddess. 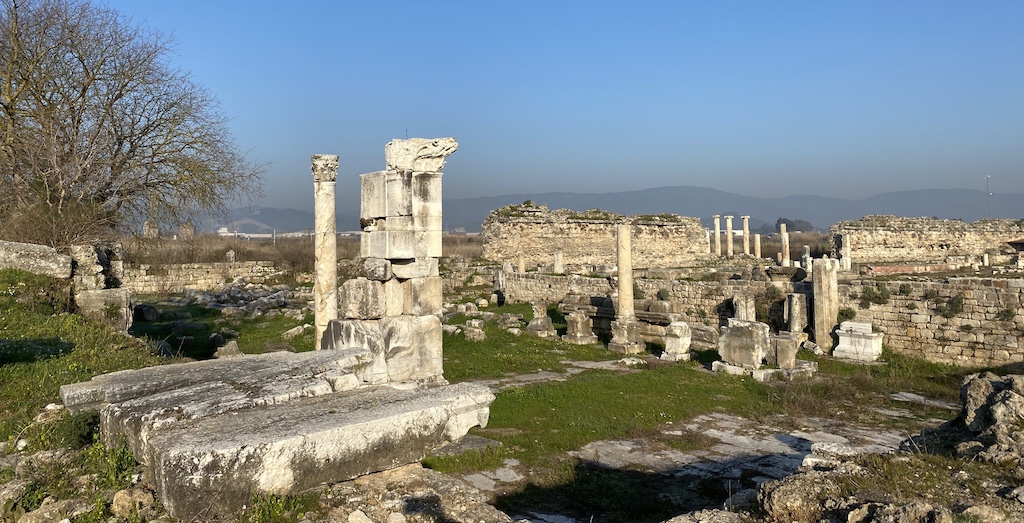 According to the legend, this place was founded by Magnets, the first Hellenic people who came to Anatolia from their homeland, Thessalia, on an unknown prophecy of Apollo. When the Magnets, who had been waiting for a second sign for 80 years after establishing the city, were told that they would not be able to return to their homeland, Leucippos took the lead and decided to take his people to Anatolia. Landing at the estuary of the Maeandrum River, the Magnets headed for Mandrolytia. Meanwhile, he fell in love with Leucippus, the daughter of Mandrolytos. Mandrolytos opened the gates of his city and allowed the Magnets to enter. The name of the city was also changed to Magnesia. 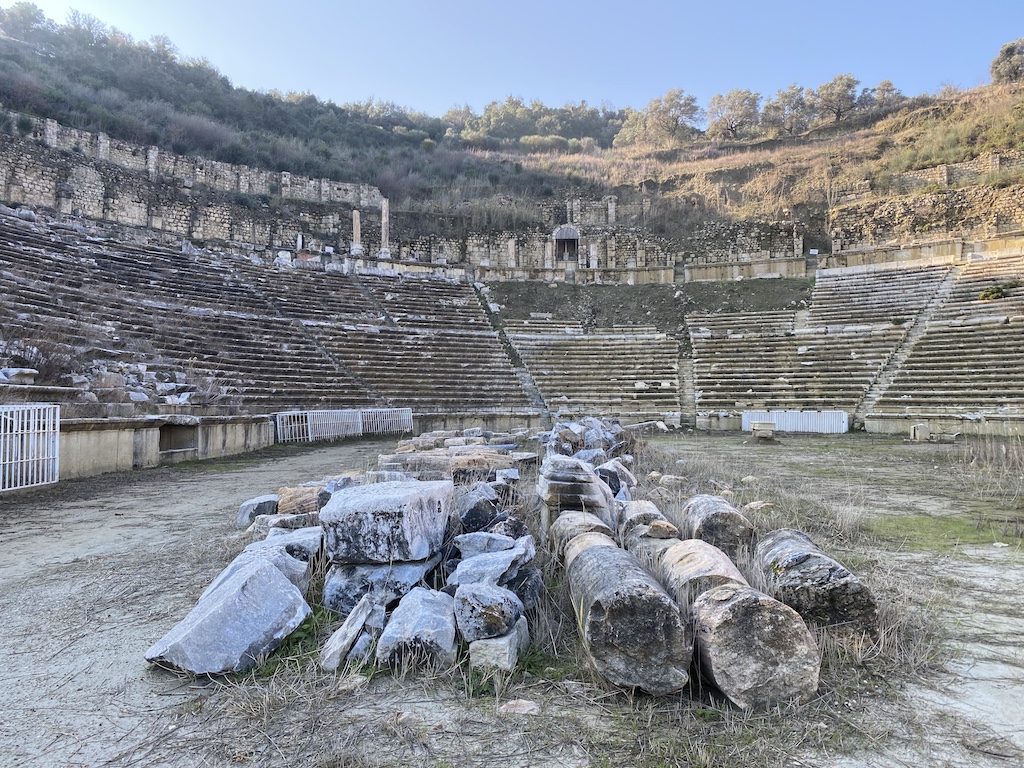 If we pass the legends and come to history… The location of the first city of Palaimagnesia is still unknown. It was taken by the Lydian King Gyges between 680-652 BC. It was destroyed by the Cimmerians in 657 BC. It was rebuilt by the Ephesians. It came under Persian rule in 530 BC. In 467-466 BC, Persian King Artaxerxes I gifted this place to Athenian Commander Themistocles. He declared this place the capital. You might remember the commander Themistocles from the movie 300: Rise of an Empire, the sequel to 300 Spartans. 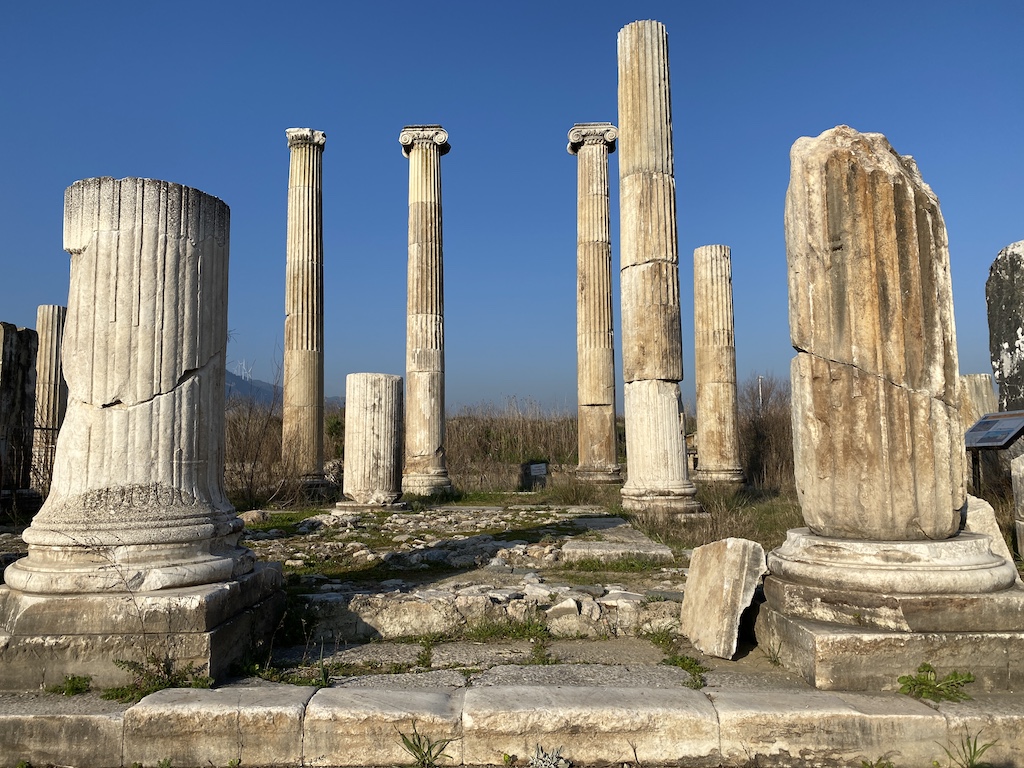 The ancient city of Magnesia was abandoned in 399 BC. Due to the floods caused by the constant change of the Menderes River bed and the Magnets' need for a safer city surrounded by walls against the Persians, it moved to its new location at the foot of Gümüş Mountain. It was inhabited here uninterruptedly until the 12th century.

At the first entrance to the ancient city of Magnesia, you enter the Sanctuary of Artemis. Three sides of the sanctuary are surrounded by stoas. There is the Temple of Artemis on the east side of the area, the Artemis Altar, Sacrifice Area and Meeting Area on the west of the temple.

The Temple of Artemis Leukopheyene in the ancient city of Magnesia was built for Artemis, the patron goddess of the city. The temple built by Hermogenes, the greatest architect of ancient times, is one of the most aesthetic temples built in honor of the goddess.

The theater structure of the ancient city of Magnesia differs from the known classical theaters. It is thought to have been made for religious ceremonies and spectators watching the ceremonies.

There are two fountains in the public toilet area with a capacity of 32 people, water channels for cleaning, perforated seating, and a sewer system that allows waste to reach the outside of the building. Here, people lined up to meet their needs.

It is thought that the structures beyond the Sacred Agora may be the People's Assembly, the City Council, and the Council of Elders.

The gymnasium is the school where young people are educated physically and mentally. The bath consists of 3 parts, the apodyterium (dressing and resting section) and the palaestra (the area where physical education or some sports are done).

Stadium of the ancient city of Magnesia

The 30,000-seat stadium is considered one of the best-preserved ancient stadiums in the world. Another feature of this stadium is that it is the only ancient stadium in the world with reliefs. Nearly 150 reliefs on the podium walls depict the contestants, the prizes awarded in the contest, and the types of contests. In the stadium, you also witness that the combined ticket system and the tribune of honor date back to ancient times. Because of the stadium, the ancient city of Magnesia was called the City of Races.

Would you like us to tailor you a private itinerary including Magnesia Ancient City? Benefit from our expertise. We offer tailor-made tours to Turkey for all interests and desires, from romantic honeymoons and scenic self-drive road trips to photo tours with experienced photographers and cultural tours in major destinations. We arrange everything for your Turkey Tours, including hotel bookings, airport transfers, guided tours, and top-notch experiences. We want you to have a great time in Turkey and make sure your trip is a memorable one as we have escorted so many tours in Turkey personally. Imagine dealing with only one person for all your travel details, receiving customized itineraries and recommendations which will suit exactly your travel interests. Contact Turkey Tour Organizer to get a personalized day-by-day itinerary for your trip to Turkey.