The Temple of Apollo at Didyma

People who lived in the centuries before Christ believed in such things as magic, fortune-telling, and prophecy. Moreover, these beliefs were the biggest factor in driving their lives. However, their religious sensibilities were very mixed and varied. They assumed that everything useful and beautiful in their own way had a separate god. For example, the god of the seas was Poseidon, the god of love was Eros, the god of wine Dionysus, and the god of light and the sun was Apollo.

The faith cultures of the peoples who settled in the fertile Aegean Region coastal areas and the Büyük Menderes (Meandros) basin were shaped in this direction throughout almost all ancient times. Didyma also inherited a saddlebag from these belief cultures. 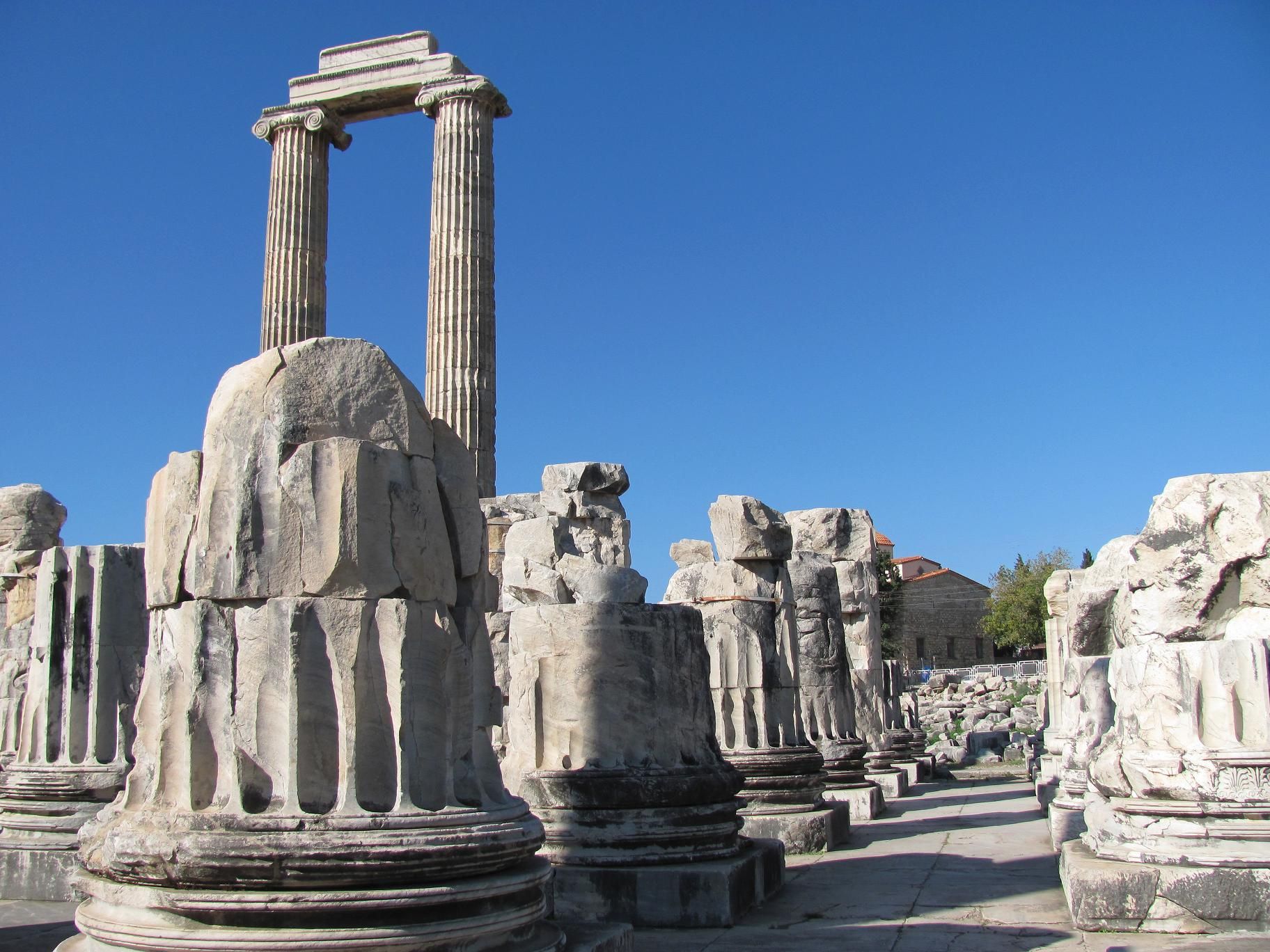 According to legend, God Apollo came across Brankhos, who was a shepherd in the Didyma region. Apollo, who loves his pure spirit and gentle approach, teaches him the secrets of prophecy. Brankhos, the shepherd, who aims to convey the divine secrets he learned to people, establishes the first temple in the name of his god Apollo, right near the bay forest and water source where the Temple of Apollo is located today.

Over time, the descendants of Brankhos were known as 'Brankhids.' People of this lineage ruled the Temple of Apollo for many years. Therefore 'Didyma' for centuries; It was also called 'Brankhidai,' that is, Brankhids Country.

The Temple of Apollo, one of the archeology paradise in the Aegean, was intended to be built as a resemblance to the Temple of Artemis in Ephesus, built in the name of Apollo's sister. After all, they were twin brothers, and their temples must have been the same. If the architects of antiquity had achieved these goals, today, 8 Wonders of the World, among which the Temple of Apollo in Didyma, would be mentioned today. 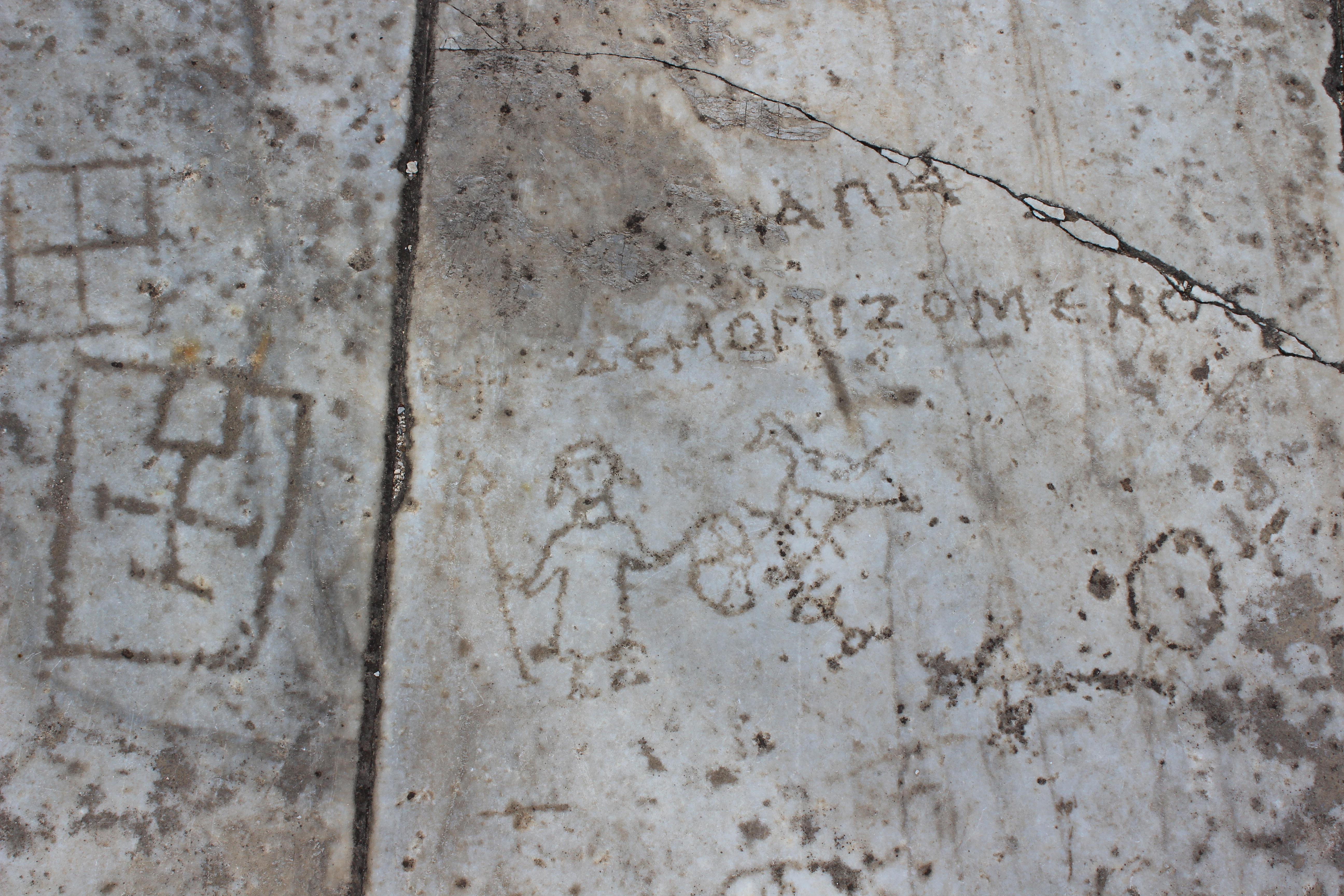 Historians and geologists agree in the thesis that the greatest destruction in the Temple of Apollo was caused by a great earthquake that affected the entire Aegean geography in 1493. The temple, which was heavily damaged in this earthquake that took place 40 years after the conquest of Istanbul by Fatih Sultan Mehmet, was abandoned in the following centuries and almost became a ruin. However, the tiny settlement established by the local people who adopted the fertile land around the temple formed Yoran Village's foundations, which will gradually turn into a Greek village in the following centuries. 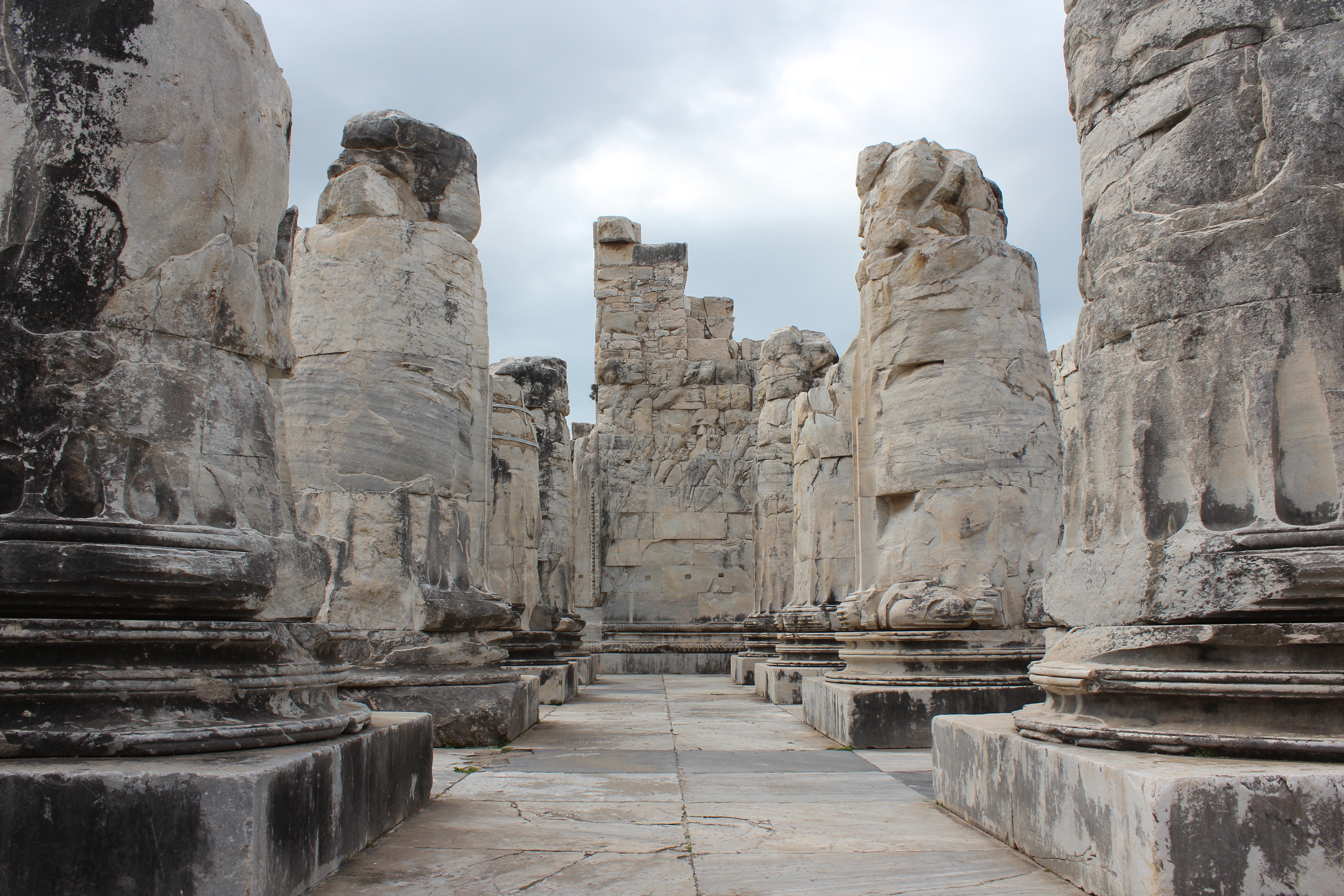 Starting from the sacred gate of ancient Miletus, the "Sacred Way" followed the sea as much as possible and reached the port of Panormos in Didyma. After that, it curved southward and ended in front of the votive and offering terrace of the Temple of Apollo. The width of the 'Sacred Way', which is approximately 16.5 kilometers between Miletus and the Temple of Apollo, varied between 5 and 7.5 meters. The first 5-6 kilometers of the 'Sacred Road' before reaching the Temple of Apollo, at the exit of Miletus; It was built as a magnificent itinerary decorated with statues of sitting people of Apollo priests and nuns, reclining lion and sphinx figures (similar to that of the Egyptian pyramids).

Didyma remained under the rule of priests known as Branchids for about 100 years in the archaic period. From this time on, the fame of the temple had surrounded the whole of ancient Asia Minor. According to the famous Greek historian Herodotus, in the 7th century BC, valuable gifts were presented to Didyma, where a sacred temple was located, by the Egyptian king Necho and the Lydian king Croesus. Herodotus, who was born in Halicarnassos near Bodrum and known as the "Father of History," writes that King Croesus sent gifts of the same weight and value to Delphi to the Temple of Didyma. 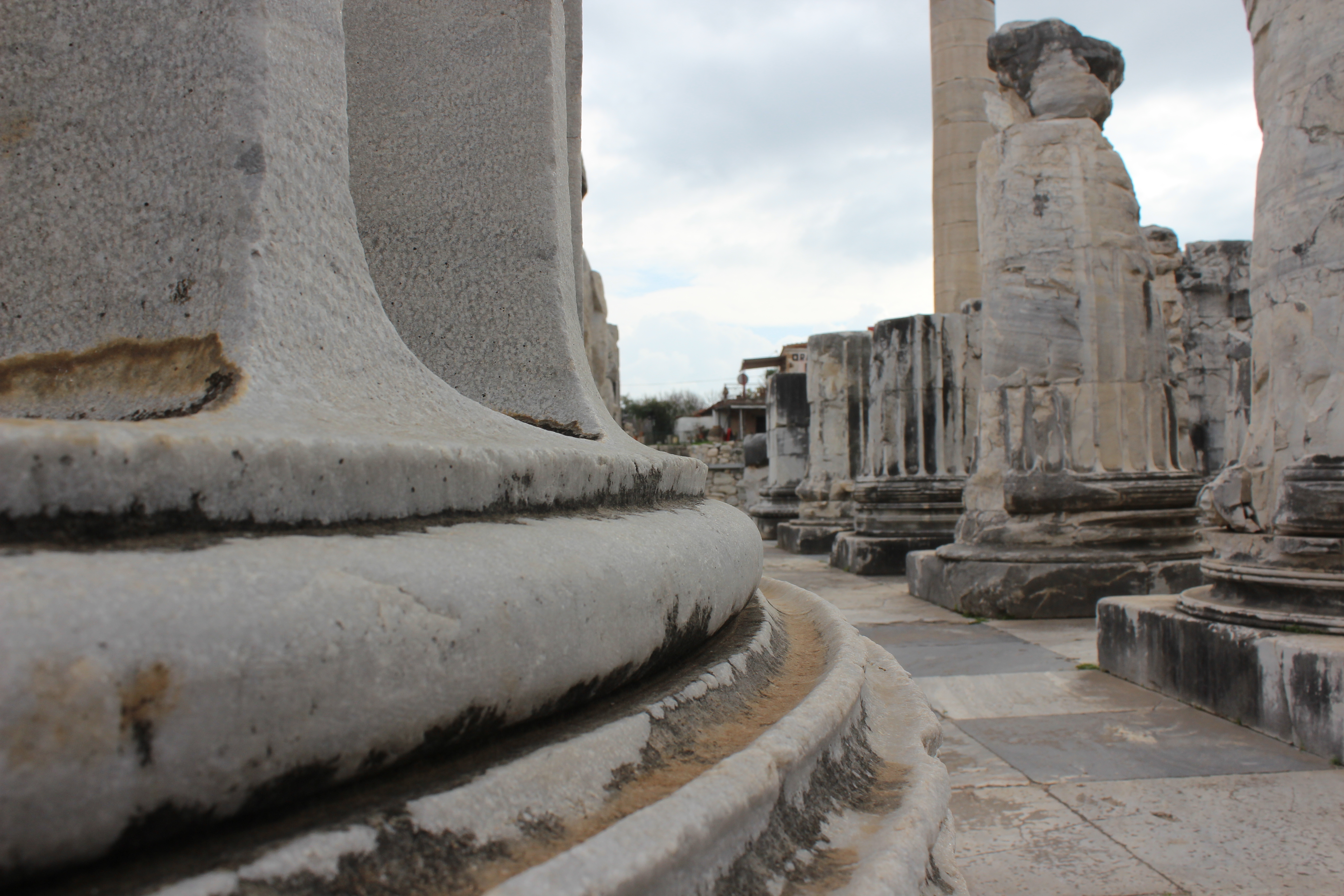 The Temple of Apollo, built as a prophecy center, measures 85.15 x 38.39 meters and is a temple with double rows of columns around it. It is designed with 21 double rows of columns on the sides, 8 on the front, and 9 on the back. 104 columns surround the inner courtyard called naos, which the public will use for worship, and 112 columns in total, including 8 columns in the naos. Since a 17.5 meters high wall surrounded the sacred courtyard, it gave the impression that it was covered from the outside. However, the high cost and constant wars in the air did not allow the temple's construction to be completed.

In this period, the size of the temple was enough to make it the third-largest temple in the ancient world, after the Temple of Artemis in Ephesus and the Temple of Heraion in Samos. It was also very magnificent in terms of the height of its columns. Each column, including its base and capitals, was 19.60 meters high. There were two half-columns at the main hall entrance where the prophets received their guests and two columns inside the hall. Unlike the others, these columns were with leaf, butterfly, and Corinthian capitals like a king's crown.

The temple, surrounded by a wide grove of laurel trees, was built on a 3.5-meter-high base with seven steps and had 14-step entrance stairs in the middle. In fact, a structure of this size cannot be easily completed. Thus, the construction continued in the III and II centuries BC, some even in the Roman period. Despite all this, the temple was not finished according to its original plans.

Would you like us to tailor you a private itinerary including The Temple of Apollo? Benefit from our expertise. We offer tailor-made tours to Turkey for all interests and desires, from romantic honeymoons and scenic self-drive road trips to photo tours with experienced photographers and cultural tours in major destinations. We arrange everything for your Turkey Tours, including hotel bookings, airport transfers, guided tours, and top-notch experiences. We want you to have a great time in Turkey and make sure your trip is a memorable one as we have escorted so many tours in Turkey personally. Imagine dealing with only one person for all your travel details, receiving customized itineraries and recommendations which will suit exactly your travel interests. Contact Turkey Tour Organizer to get a personalized day by day itinerary for your trip to Turkey.