Troy Ancient City is located on Hisarlık Hill to the west of Tevfikiye Village, 30 km from Çanakkale. First, the famous Trojan Horse model, which rose with great majesty at the city entrance and was interpreted by a Turkish artist in 1975, is the subject of mythology and greets its visitors.

Before going into details about the Ancient City, it is necessary to talk about the story of the Trojan Horse and Homer because the most important reason why this city is so important is that it was the subject of the Iliad, which was compiled by Homer, one of the famous poets of the Ancient World.

The Ionian poet Homer, who is thought to have lived in the 9th century BC, describes the war between the Akhas from the mainland of Greece and the Iliad Epic's local Trojans. Paris, the King of Troy's son, falls in love with Helen of Sparta, wife of the King of Akha, and escapes to Troy by taking her. Thus, the epic, which tells about the war that started and lasted for years, is significant for the literary world as it is one of the oldest written literary texts. Nevertheless, when it comes to facts, one should not perceive Greek myths as history but enjoy the legends, but ultimately talk about data-based evidence. 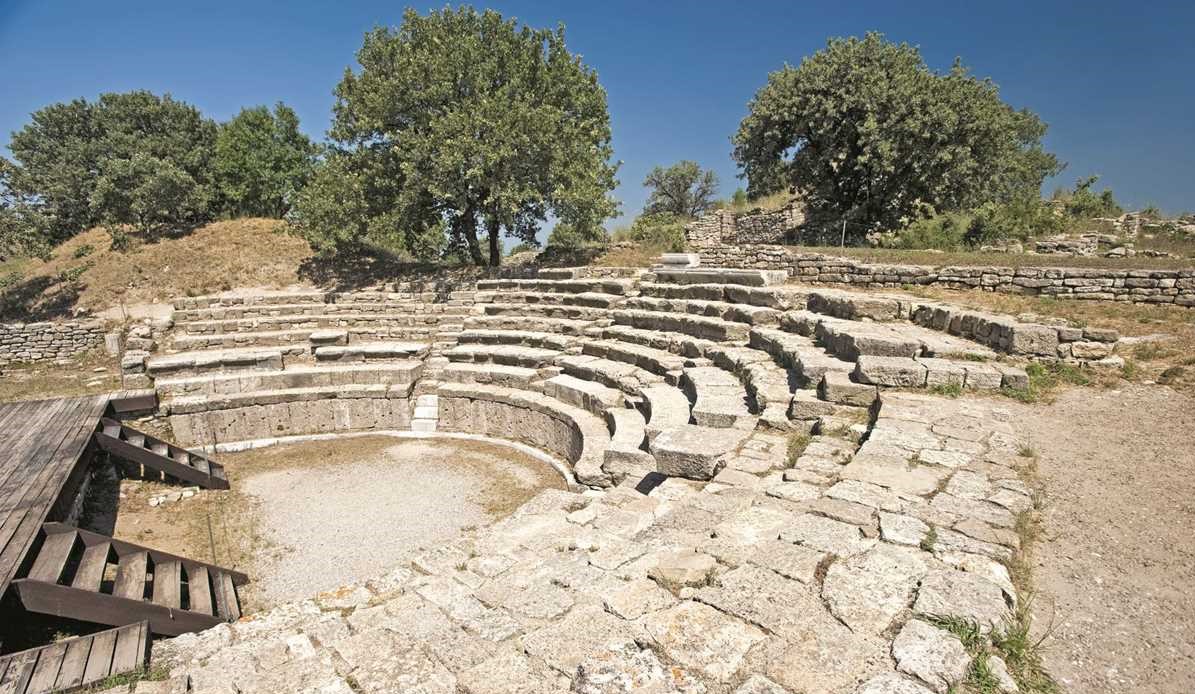 As for the Trojan Horse, this ancestor, which has no place in the Iliad, was mentioned in the next epic Odessey, which is also attributed to Homer. To win the war against the Trojans, the Akhas built a huge wooden horse with Odessey's suggestion, the famous king of the Akhas, and set their soldiers inside and leave them in front of the Troy walls. The Trojans think the horse is sacred and take it to the city. In the middle of the night, the Akha soldiers come out of the horse, hiding and destroying Troy and returning to Greece with Helen. Trojans, on the other hand, continue their lives by rebuilding their destroyed cities.

Troy was a port city when it was first established. However, it is known that the sea fills due to the alluviums carried by the Karamenderes and Dürmek streams around it for years, and the city has gradually lost its importance by moving away from the sea. Its location today is 6 km from the Aegean Sea and 4.5 km from the Dardanelles shore.

The earliest settlement in Troy dates back to the 3,000s BC. The settlement that started with the Early Bronze Age ends with the Romans. In other words, Troy is one of the most important ancient cities in the world with a history of 5,000 years.

The first excavations were carried out by German merchant and archaeologist Heinrich Schliemann in the 1870s, in line with the Ottoman Empire's permission. Many artifacts unearthed during excavations were taken abroad together with the Treasure of Troy at that time. Most of these works are transported by Schliemann, first to Greece and then to Germany. During the Second World War, most of them are taken as booty by Russia and taken to Moscow.

There are 9 different city layers in the Troy settlement. Each layer clearly indicated by numbers all over the excavation area belongs to a certain time period in the city's past. This shows that the region has been destroyed and rebuilt many times, especially by earthquakes. In other words, this unique geography has been the cradle of many civilizations throughout history.

Due to adobe used in the houses' construction, the layers accumulated over time and formed an artificial hill. Approximately 50 different building phases have been identified during long-standing excavations. 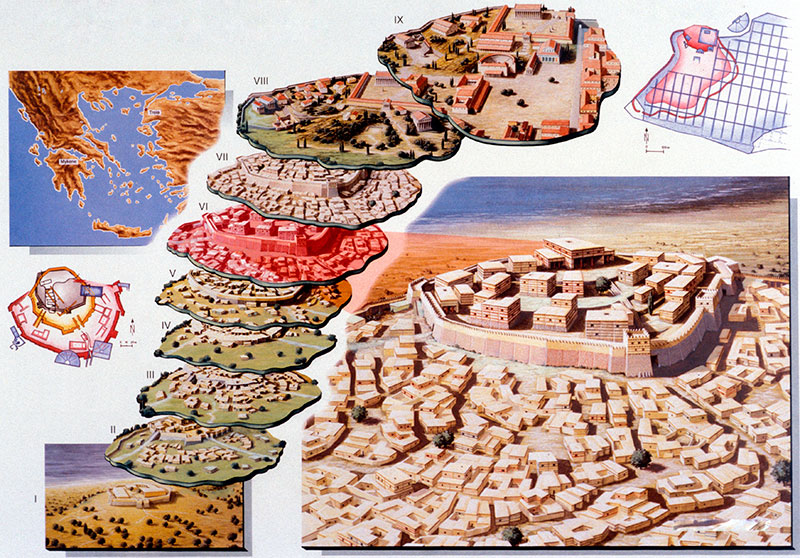 This floor, dated between 3000-2500 BC, shows the first settlement phase with 10 different building levels. Protected by towers and walls determined to be 115 m long and bearing traces of the Aegean culture, Troy 1 was devastated. The narrow and longhouse on the 1st floor of Troy have a large room with two hearths.

This cultural layer, dated between 2500-2200 BC, consists of 7 different building levels. This floor shows that there has been a development compared to the first period in terms of settlement and architecture. There are multi-room houses and partially smaller houses side by side along the narrow streets. The Megaron (multi-room house) with a colonnaded courtyard unearthed on this floor is an interesting find. Besides, the use of columns in architecture is seen for the first time in this phase. Archaeological findings show that Troy 2 was destroyed by fire.

This settlement, dated to 2200-2050 BC, spreads over a wider area and indicates an unplanned city formation.

This layer between 2050-1900 BC consists of 5 building levels and has been severely damaged due to Schliemann's excavations. 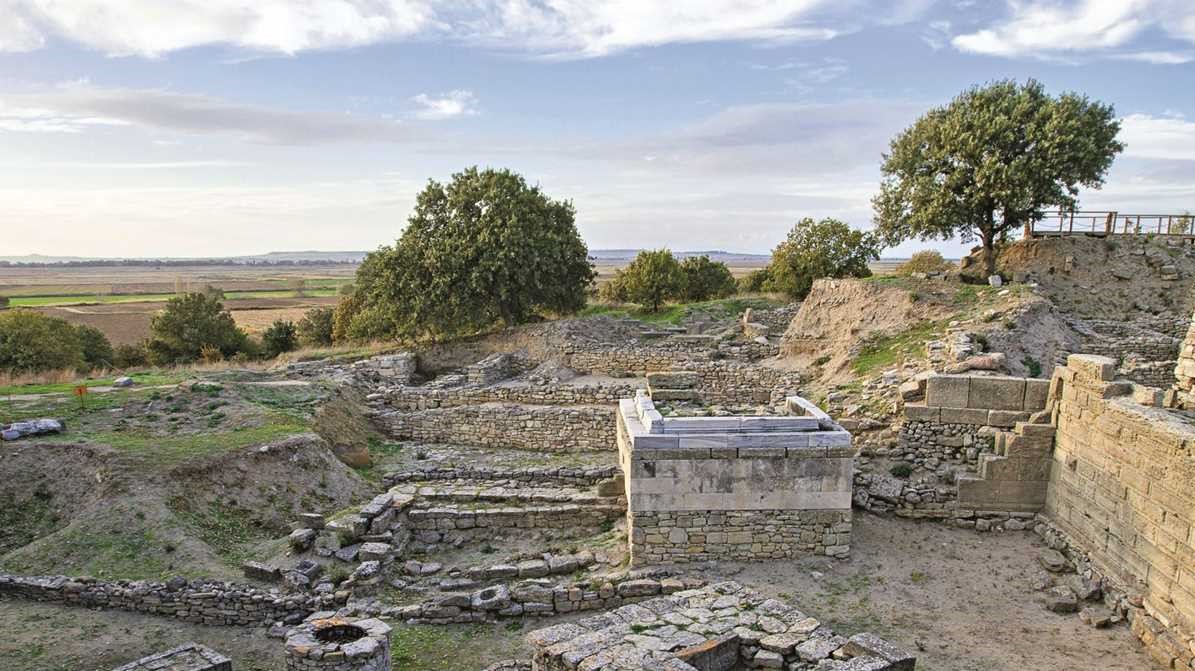 It is observed that the settlement between 1900-1800 BC has developed in terms of architecture and urbanization compared to the previous two periods. The houses here are planned, with a few rooms and courtyards and have a large hall.

It is dated to 1800-1300 BC. It consists of 8 building levels. In this period, the existence of Hittites in Central Anatolia is known. The development in architecture is noteworthy. The house with two rows of column bases has an Anatolian architecture, the cistern, and the 8 m deep good structures from this period. The walls, which were rebuilt from limestone, have a careful craft. The walls were supported by towers built for surveillance purposes. The phase of Troy 6 coincides with the period of the legend of Troy. According to some scientists, it was destroyed by a big earthquake.

There is a settlement gap of several hundred years. It is dated to 700-85 BC. It is the period of the Persians, and then of the Macedonian King Alexander the Great. The most important temple here is the Temple of Athena. However, as the place where the temple was located was destroyed by Schliemann, it is in the form of a pit today, and it is called the Schliemann Pit.

It is dated to 85 BC and 500 AD. It is the period of the Romans. During this period, Troy became one of the important trade centers. The Roman theater and the bouleuterium (parliament) are among the ruins.

Would you like us to tailor you a private itinerary, including the Ancient City of Troy? Benefit from our expertise. We offer tailor-made tours to Turkey for all interests and desires, from romantic honeymoons and scenic self-drive road trips to photo tours with experienced photographers and cultural tours in major destinations. We arrange everything for your Turkey Tours, including hotel bookings, airport transfers, guided tours, and top-notch experiences. We want you to have a great time in Turkey and make sure your trip is a memorable one as we have escorted so many tours in Turkey personally. Imagine dealing with only one person for all your travel details, receiving customized itineraries and recommendations which will suit exactly your travel interests. Contact Turkey Tour Organizer to get a personalized day by day itinerary for your trip to Turkey