Hans and Caravanserais were really important to the trading system of the Turkish communities after their interaction with the Persians. Long-term settled communities, Persians had a great network of trade from the East to the West and from the South to the North. Turks brought the caravanserai and han system to Anatolia. Seljuks built more caravanserais to their lands as Anatolia was still not a Turkish populated stable land. Ottomans and other Turkish municipalities, however, built multiple hans to cities in Anatolia to support the growing trade from East to the West. Hans in the cities are different than the Caravanserais in the outback. Caravanserais were only used as a safe shelter by the caravans and they did very little business with the little number of people living in the vicinity. Hans were located in the cities and they had multiple functions such as a hotel, a stable, wholesale and retail shops, and storage. They had more crowd yet offered more business opportunities to the caravans unlike the caravanserais in the outback. It was crucial to the central governments to erect hans to the cities to support handicrafts, artisans and create a volume of trade from them. The Grand Bazaar in Istanbul is a complex of different hans and it is still the oldest running shopping mall in the world. Bursa City was the capital of the Ottoman Empire and they built the first examples of Turkish Hans to the city after the 14th Century.

Emir Han, located just below the Ulu Mosque, was built by Orhan Bey in the second half of the 14th century. This inn, which consists of a two-storey portico lined up around the inner courtyard and rooms opening here, is the first example of ottoman inns. There are thirty-six windowless cellars as warehouses on the lower floor, while on the upper floor there are thirty-eight rooms. There is a fountain and historical plane trees in the middle of the inn.

Located on Cumhuriyet Street, the inn was built by Semiz Alizade, one of the grand viziers of Kanuni, in the 16th century. The walls of the two-storey inn were built with cut stones and bricks. There are porticoes in front of the rooms on the lower and upper floors.

This inn, located next to Demirkapı Bazaar, was built by Ahi Bayezit's son Hacı İvazPasha in the 15th century and gifted to Çelebi Mehmet. The inn was built to provide income for the Green Mosque and has two floors. In the building, there are porticoes lined up around the square planned courtyard and rooms opening to them. The porticoes are covered with vaults and the rooms are covered with barrel vaults. There are twenty-six rooms on the ground floor and thirty rooms on the upper floor.

Located next to the Ivaz Pasha Mosque, this inn was built by Çelebi Mehmet to generate income for the Yeşil Complex. It is the largest of the inns in Bursa. The walls of the inn were built with stones and bricks. There are thirty-nine rooms on the ground floor of the inn and forty-two rooms on the upper floor. The porticoes in front of the rooms of this inn, which was built in the style of classical Ottoman inns, are covered with a dome and vault. With the repairs made, only the western part of the inn is original; other parts have been restored.

Located between the Ulu Mosque and the Orhan Mosque, this inn was built by II Bayezit. He had it built in 1490 to generate income for charitable structures in Istanbul. It is the most beautiful and the most intensively used old bazaar in Bursa. This inn, the walls of which were built with bricks and stones, is a two-storey building located around a rectangular courtyard. To the east of this inn is a second courtyard with barns and warehouses. The building is entered by a crown door from the Grand Bazaar, and there are forty-five rooms on the lower floor and fifty rooms on the upper floor. The building is covered with vaults. In the middle of the courtyard, there is a pavilion-masjid made of stone, with a fountain under it and sitting on eight pillars.

In 1508, Sultan II Bayezit had it built for his foundations in Istanbul to generate income. It consists of two-storey colonnades around a large courtyard and rooms behind them. There are thirty-eight rooms on the second floor and forty rooms on the first floor. The two rows of shops in front of the inn were burnt down in 1519 and later repaired.

Located next to the Tuz Pazarı Mosque, this inn was built by Timurtas Pasha's son Omur Bey in the 15th century in order to generate income for the mosque. Its walls were built with cut stones and bricks. It consists of two-storey rooms arranged around a rectangular courtyard like Ottoman inns. It has 18 rooms upstairs and17 rooms downstairs.

Located in Aksu village of Gürsu district, this inn was built in 1498 by Muhammedoglu Hoca Tursun. Today, only a part of the north gate of the building is still standing.

Located in the Karacabey district, near the Seyran village, the inn was built by the great Celaleddin Eyne Bey in the years of 1394-1395, during the time of Bayezid the Thunderbolt. It is a structure with three deep naves, covered with vaults and without a courtyard. 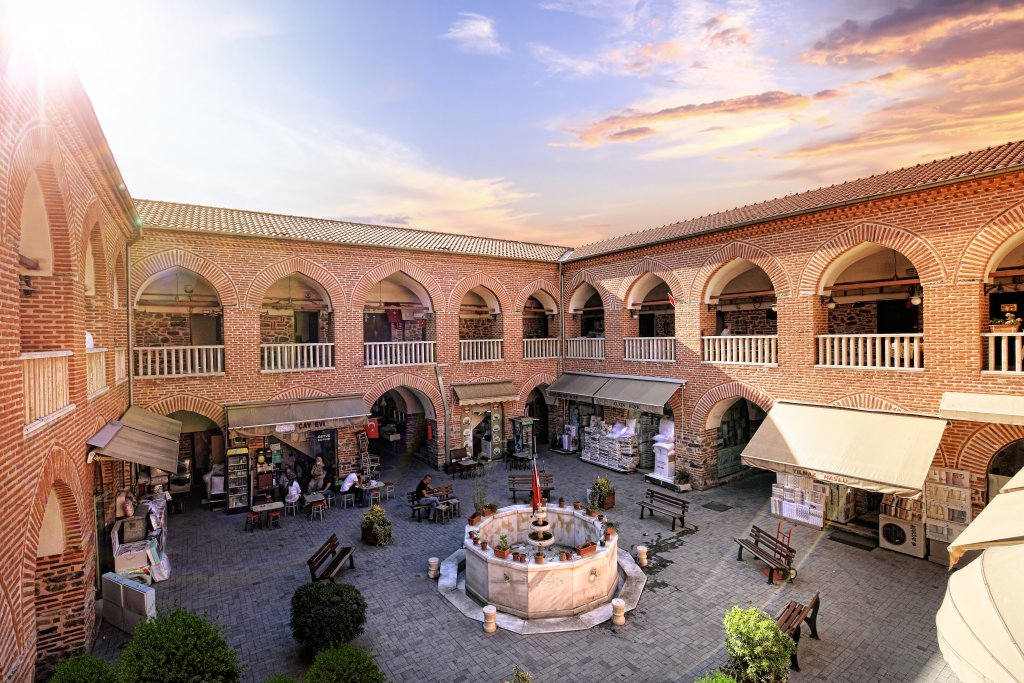 Would you like us to tailor you a private itinerary including The Historical Markets of Bursa such as the silk market? Benefit from our expertise. We offer tailor-made tours to Turkey for all interests and desires, from romantic honeymoons and scenic self-drive road trips to photo tours with experienced photographers and cultural tours in major destinations. We arrange everything for your Turkey Tours, including hotel bookings, airport transfers, guided tours, and top-notch experiences. We want you to have a great time in Turkey and make sure your trip is a memorable one as we have escorted so many tours in Turkey personally. Imagine dealing with only one person for all your travel details, receiving customized itineraries and recommendations which will suit exactly your travel interests. Contact Turkey Tour Organizer to get a personalized day-by-day itinerary for your trip to Turkey.