Kibyra Ancient City inherited from the Lycians, is located on three hills overlooking the Golhisar plain, at the foot of the Akdag mass in the Golhisar district of Burdur. The city, surrounded by Caria, Phrygia, Lycia, and Pisidia in ancient times, was located at the east-west intersection. What's not here? Giant monumental structures, a 10,000-seat stadium built with the Roman and Byzantine architectural tradition, the Medusa mosaic in the Parliament Building, the longest gladiator friezes from the ancient period in Turkey, were gathered in the ancient city of Kibyra. It is thought that the Kibyrans were a warrior tribe of Lydian origin. The ancient city is on the UNESCO World Heritage tentative list.

Kibyra was affiliated with the Kingdom of Pergamon between 197-58 BC. In the 2nd-1st centuries BC, the ancient cities of Kibyra, Boubon, Balboura, and Oinoanda formed a joint assembly of four formations (Kabalis Tetrapolis). Only Kibyra had two votes in this union. This unit was disbanded and destroyed by the Roman General Murena in 82 BC. After this date, Kibyra was included in the Province of Asia, and other cities were included in the Lycian League. During the Roman Empire Period, Kibyra became the judicial center of the Asian State Governor, to which approximately 25 cities were affiliated, under the name of the Kibyra Conventus.

Kibyra, which was destroyed by a great earthquake in 23 AD, was rebuilt by the Roman Emperor Tiberius.

Kibyra, which had its heyday especially between the 1st and 3rd centuries AD, is famous for its ironwork, leather making, pottery, and horse breeding. The ancient city of Kibyra, which was a large industrial city and had a strong economy and army, was the only city with which the Roman Empire made a treaty in Anatolia. It is thought that the reason why the Roman Empire made an agreement with a mountain city in Anatolia on equal terms was related to the military and economic power of the city. According to Strabo, the ancient geography writer, there were more than 30,000 soldiers and more than 2,000 cavalry units in Kibyra during the reign of Alexander the Great.

Where is Kibyra Ancient City?

When you go on the Denizli-Antalya road from Korkuteli, you pass through the Golhisar district of Burdur. Kibyra Ancient City is located within 7 km of this road.

Known as the city of fast horses and heroic warriors, the ancient city of Kibyra draws attention especially with the Medusa mosaic in the building used as the Parliament Building and the Odeion (House of Music).

With a capacity of approximately 10,000 people and a length of 200 meters, the Stadion is considered one of the most magnificent ancient stadiums in Anatolia. If you try to feel the struggles of the gladiators while visiting this place, you will be even more impressed.

The main street, which is approximately 800 m long, was used from the 4th century BC to the 8th century AD. 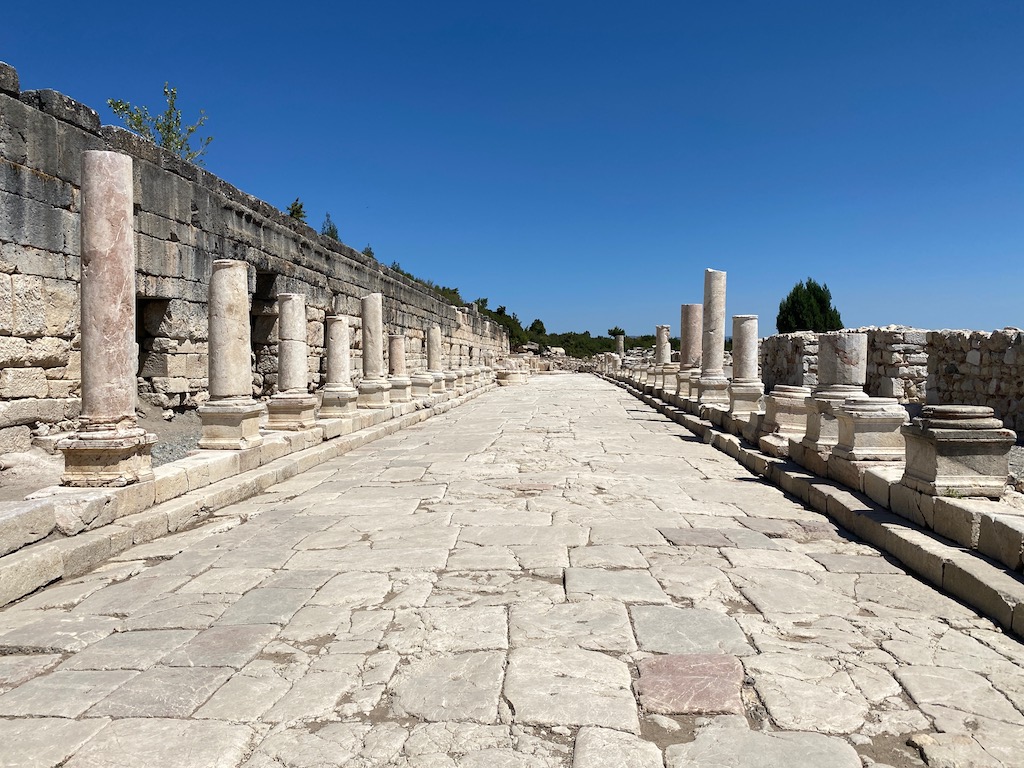 There is a large agora (bazaar) in the form of 3 terraces in the ancient city of Kibyra.

The Roman Bath Complex is dated to the 1st century AD.

The theater has a capacity of approximately 9,000 people. There is a temple structure on the benches that was later converted into a church.

The Tholos Nymphaeum is a planned fountain structure. It was built both to be a social space and to meet the water and sewerage needs of the city with its different evacuation systems.

The building is known as the Odeion; was used as a music-concert hall, winter theater, judiciary, and city council building. Odeion, which has a capacity of approximately 4,000 people, is the largest structure covered with a roof in ancient times.

The Medusa mosaic, made of red, green, and white marble, located at the very center of the orchestra, is unique in the world. Medusa mosaic draws attention with its construction technique, with its hair consisting of snakes and eyes that turn people into stone.