Pamphylia, which means the country of all tribes, is the region between Lycia and Cilicia in Antalya, which includes historical cities such as Aspendos, Perge, and Side. Pamphylia plain has been a suitable and favorite area for settlement since prehistoric times. The plateau plane of the Perge acropolis has also been preferred for settlement since ancient times. Perge, once the capital of this residential area, is an ancient city located 18 km east of Antalya, within the Aksu district's borders. 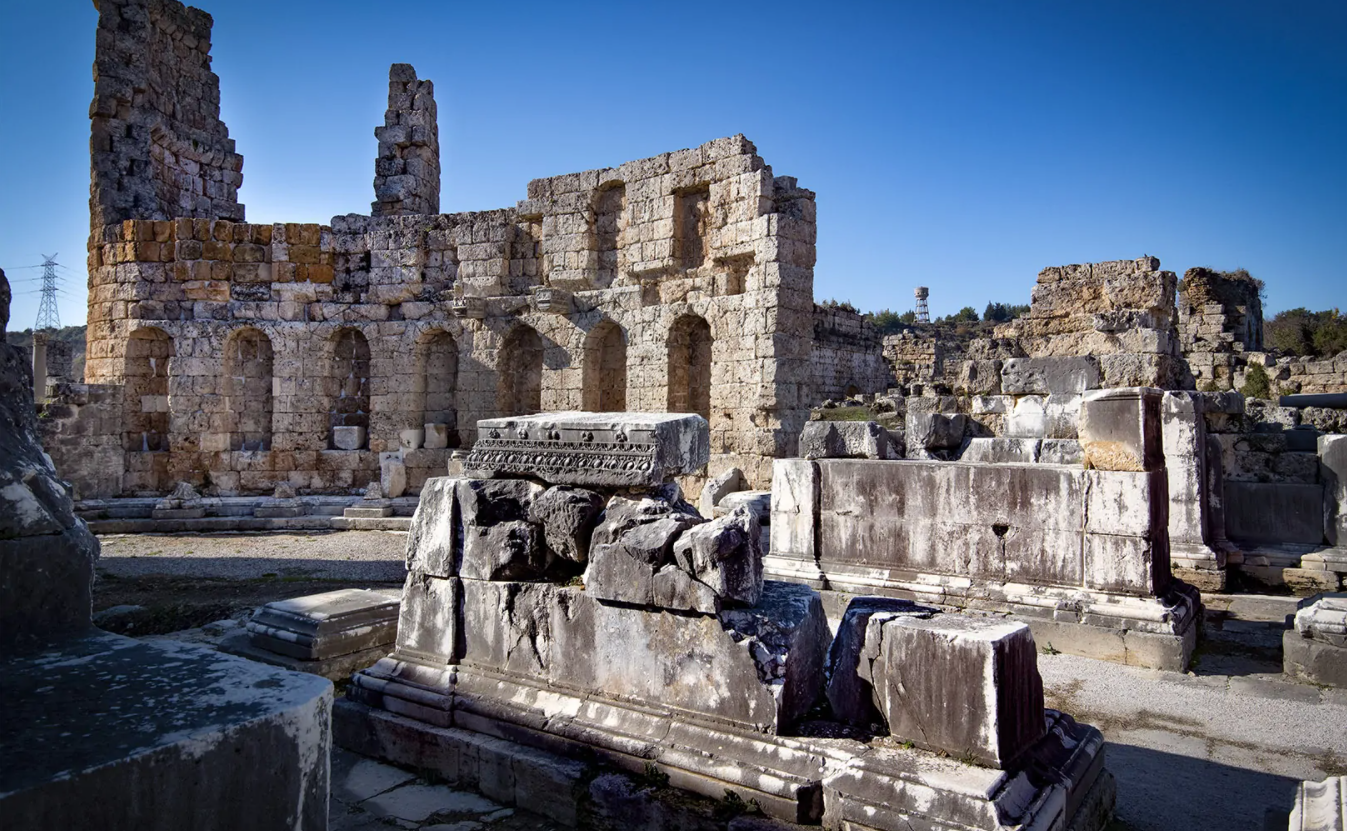 Why is Perge so important?

The first settlement in the city took place on the northern hill plain, and over time it developed and expanded on the plain south of the hill. Perge, located on the ancient road that starts in Bergama and ends in Side, owes its geographical importance and development, especially to the Aksu (Kestros) river. The river, which is not suitable for transportation today, has played a vital role in providing transportation in the city and making the soil fertile in ancient times. It is known that the Apostle Paulos (Pavlos) and his friends sailed from the port of Paphos in Cyprus and reached Perge. There is no doubt that this is only through Kestros (Aksu River). This integration of the city with the river can be understood from the coins, reliefs, and the River God (Kestros) in the monumental fountain on the southern skirt of the acropolis.

It is understood from the inscription on the bronze plate found in the Hattusha excavations in 1986 that the city of Perge occupied an important place during the Hittite Empire. According to the legends of Hellenic Heroism, it is claimed that the Hellenic Achaeans came to Pamphylia and established the ancient cities of Phaselis, Perge, Syllion, and Aspendos. According to historical documents, the Macedonian King Alexander the Great sent his army from Lycia to Pamphylia from the Thracians' road over Taurus. He reached Perge by following the coastline with his close commanders. Since there is no mention of any war between the city of Perge and the Macedonian army in the sources, it is thought that the city opened its doors to Alexander the Great without fighting. 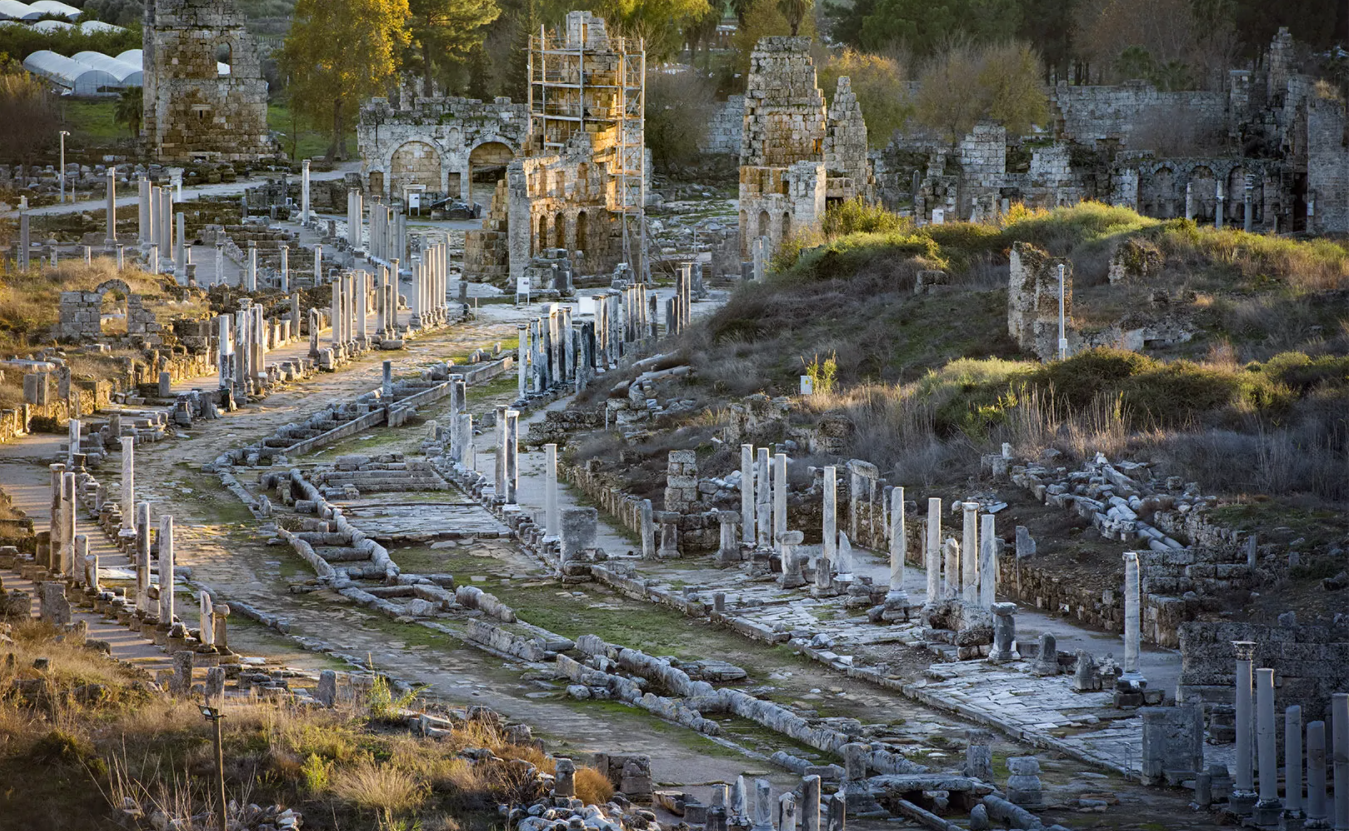 The most organized Roman city

Since the 1st century AD, Perge has adapted to the new world order created by the Roman Empire and became one of the most organized Roman period cities in the region and the whole of Anatolia. As a result of the excavations carried out by Istanbul University since 1946, important monumental structures of the city, which is famous for its marble sculptures, which are now exhibited in Antalya Museum, have been brought to light. Thanks to the sculpture find Antalya Museum has the distinction of being one of the richest Roman Period sculpture museums in the world.

Walls made of half-ton stones

You can start your tour of Perge Ancient City by walking along with the monumental city walls' ruins. These walls built after Alexander the Great dominated the city, were built by stacking stones, each of which was about half a ton. Due to their natural structure, these huge stones have merged with the effect of rainwater over time, and thus the walls surrounding the city have survived to this day. During the conquest of the region by Alexander the Great in 333 BC, the fact that the Compasses hosted the forces of Alexander without any resistance is attributed to the lack of walls protecting the city. For this reason, it is assumed that today the most monumental structures of the city, the two round towers that have become the symbol of the city, and the city walls were built after Alexander conquered the city.

The ruins that can be visited today are mostly from the Roman period. The main lines of Perge city plan are two main streets, one extending in the north-south direction and the other in the east-west direction. The Pillared Street, which is the backbone of the city, starts from the Hellenistic gate with columns and basilicas lined up along the road and ends at the monumental fountain at the foot of the acropolis. In the middle of the approximately 300 meters long street, there is a two meter wide partitioned water canal and mosaic porticoes and shops on both sides. 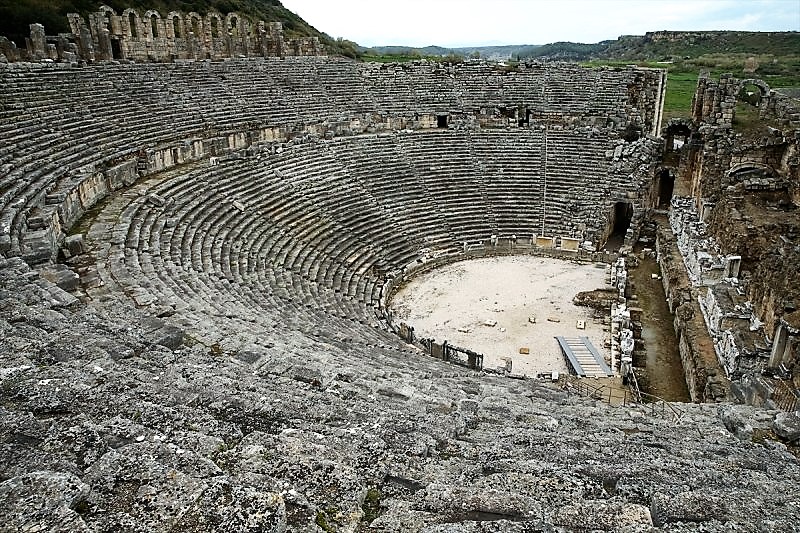 The water channel that gives life to the city

The monumental fountain, one of the important structures of the ancient city, adorns the statue of Kestros, which is expressed as the god of the Aksu River, which is located just near the city. The water flowing from this fountain passes through the channel in the middle of the road and divides the city into two. On this 22-meter-wide street divided by the water channel in two, it is still possible to see the traces of the cartwheels used at that time. A water canal connected with pools passes through the middle of the city, which was established considering the region's climatic characteristics; who knows what comfort is in the summer days when the temperature exceeds 40 degrees.

Perge Ancient City also has an agora located in many ancient cities and where all kinds of commercial and political activities related to the city are held. The floors of some shops in the Agora, which means gathering in Ancient Greek, consisting of a large courtyard and surrounding shops, are covered with mosaics, and one of these shops opens to the agora. In contrast, the other open to the streets surrounding the agora.

Would you like us to tailor you a private itinerary, including Perge Ancient City located in Antalya? Benefit from our expertise. We offer tailor-made tours to Turkey for all interests and desires, from romantic honeymoons and scenic self-drive road trips to photo tours with experienced photographers and cultural tours in major destinations. We arrange everything for your Turkey Tours, including hotel bookings, airport transfers, guided tours, and top-notch experiences. We want you to have a great time in Turkey and make sure your trip is a memorable one as we have escorted so many tours in Turkey personally. Imagine dealing with only one person for all your travel details, receiving customized itineraries and recommendations which will suit exactly your travel interests. Contact Turkey Tour Organizer to get a personalized day by day itinerary for your trip to Turkey